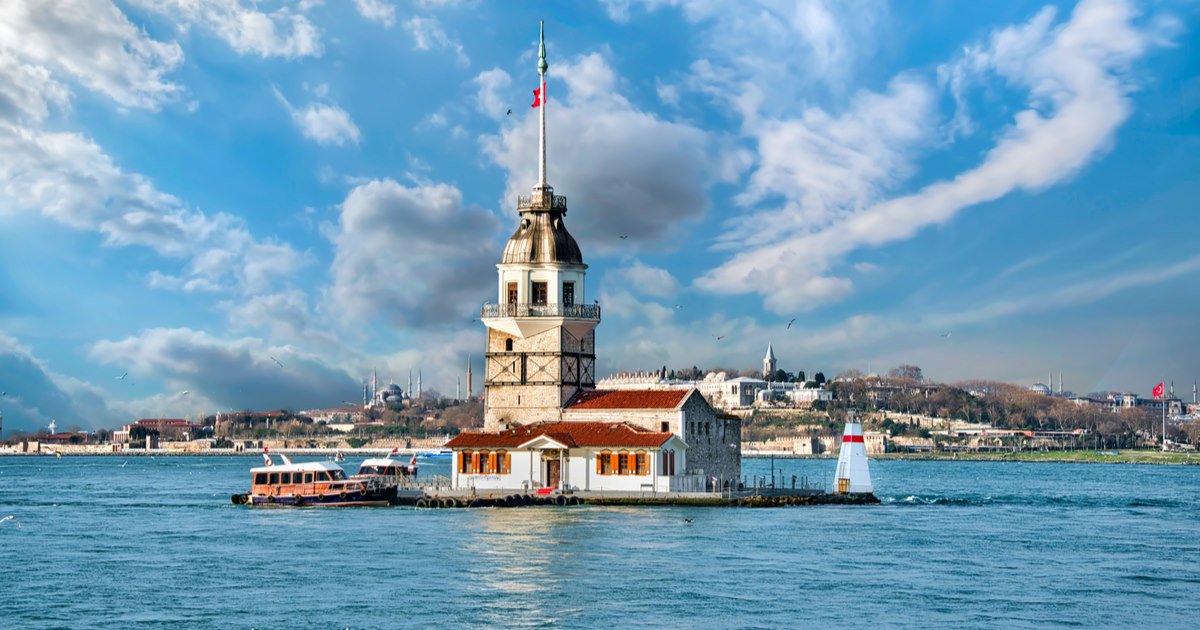 The legendary Maiden’s Tower, also called Leander’s Tower, is one of the iconic landmarks of Istanbul.

Situated on a small islet in the middle of the Bosphorus off the Asian coast of Üsküdar, it has served various purposes over the years. With its numerous legends and dreamy panoramic view, the Maiden’s Tower is regarded as a timeless symbol of love in Turkey.

On this page, read everything you should know before visiting, including its story, ferry tickets, and how to get there. 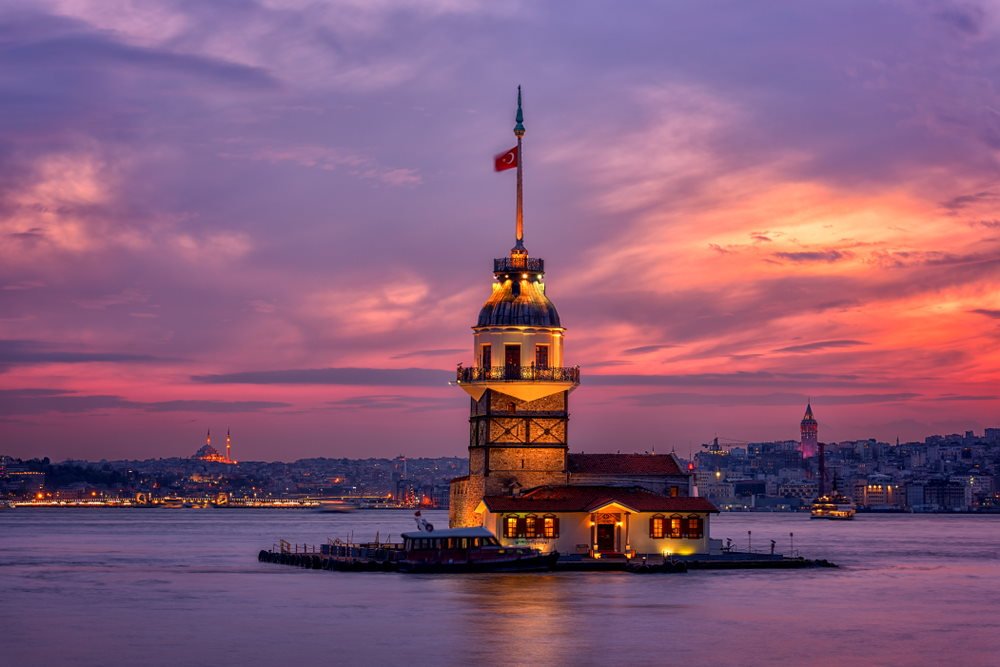 Things to do at Maiden’s Tower

The Maiden’s Tower is one of the most dominating symbols of Istanbul. The remarkable structure, perched alone on a small island, is surrounded by a mysterious and romantic atmosphere.

See below the top things to do at Maiden’s Tower:

1. Take a Ferry to the Maiden’s Tower

Set in the middle of the famous Bosphorus Strait, you can experience the enchantment of this iconic structure by taking a ferry ride. Admire the important monument up close and enjoy an extraordinary experience.

During a peaceful cruise along numerous sights, you will have the chance to get very close to the tower. Soak up the breathtaking scenery with the magnificent sea view and the legendary tower in front of you - a true visual feast... Fantastic selfies are guaranteed!

You can find tickets for the ferry ride around Maiden's Tower offered by our partner Istanbul Welcome Card under the section Tickets & Tours.

The Maiden’s Tower is one of the world's most photographed sights. No wonder, it is considered to be one of most instagrammable places of Turkey and a must-visit for hobby photographers searching for the best Istanbul shots.

You will have plenty of opportunities to capture the most beautiful photos from here.

There is no doubt that one of the most beautiful places to watch the sunset with a 360-degree panorama over Istanbul is the Maiden’s Tower.

Whether it’s from the island or during the ferry ride, take in the magical view of the sunset from the Asian side of Istanbul.

Until recently, the Maiden's Tower functioned as a restaurant and wedding venue. Due to the extensive renovation project, the restaurant is currently closed.

Since the tower is to serve exclusively as a monument, it is expected that the restaurant will remain permanently closed. 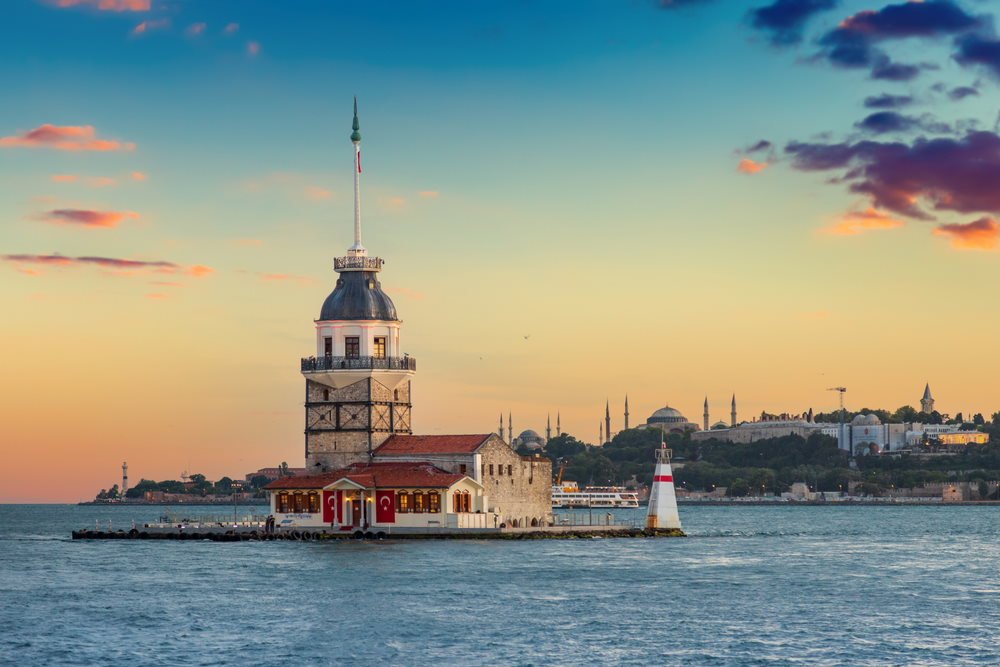 Legends of the Maiden’s Tower

The Maiden’s Tower is associated with many legends. See here three of the most famous ones:

1. The Legend of the Princess

The Turkish name "Kız Kulesi", meaning "Maiden's Tower", goes back to a folk tale about a princess whose death by snakebite was foreseen by a prophetess. Immediately, the king had a tower built in the middle of the Bosphorus to protect his daughter from her fate. But a fruit basket, in which the snake was hidden, got to her. The princess died just as the oracle had predicted.

2. The Legend of Hero and Leander

Its European name "Leander's Tower" goes back to an ancient legend, which is supposed to have taken place in the Dardanelles and not at the entrance of the Bosphorus.

According to tradition, Leander swam every night through the Hellespont to his lover, the priestess Hero. Until one night, the torch that guided him the way went out. He lost direction and drowned. When Hero found her dead lover on the shore, she too threw herself into the floods.

3. The Legend of the Two Loving Towers

Another legend says that the two iconic towers of Istanbul, the Maiden’s Tower on the Asian side and the Galata Tower on the European side, actually fell in love with each other. The story goes that they loved each other for centuries, but since they could not communicate, each of them considered their love Platonic.

Allegedly, the Galata Tower wrote hundreds of letters for the Maiden's Tower, but it was unable to send them. 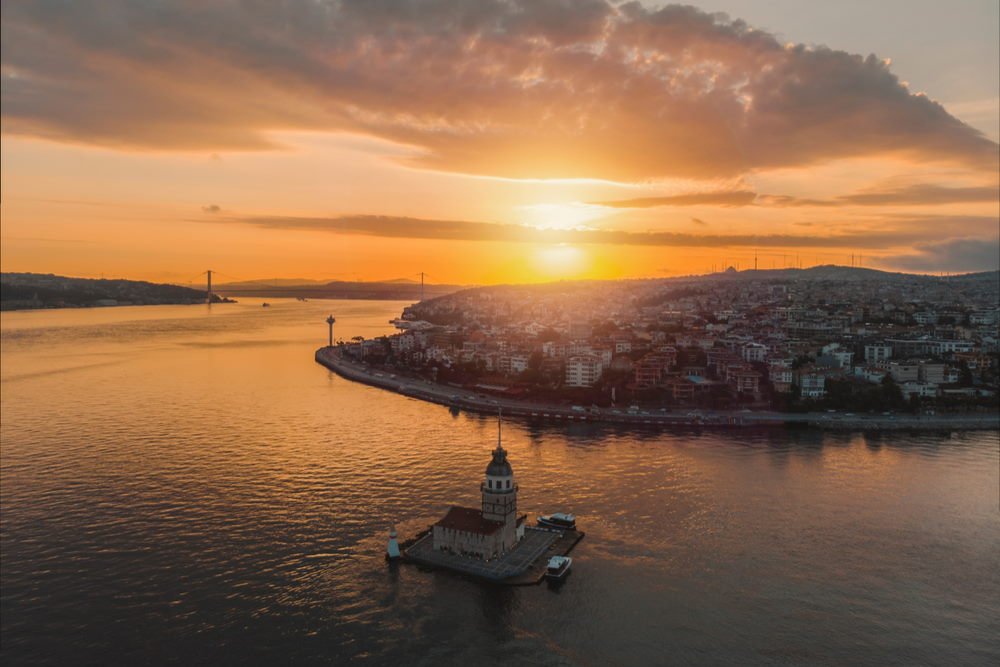 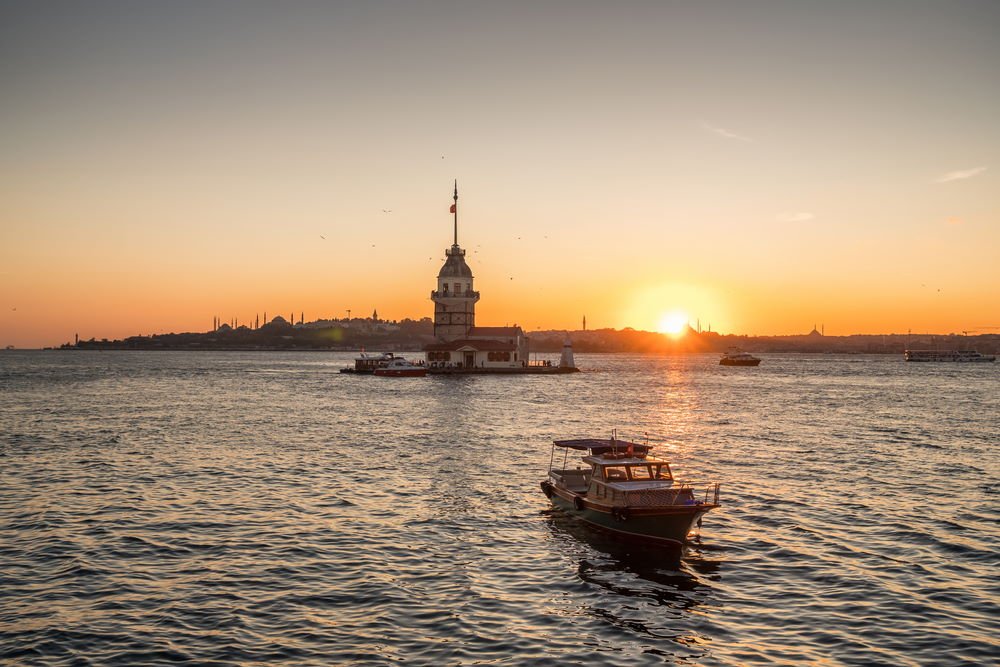 How to get to Maiden’s Tower?

Maiden’s Tower Boat Services: From the Asian coast, shuttle boats depart from Üsküdar-Salacak every 15 minutes for visitors to the Maiden’s Tower.

Alternatively, tower visitors can take the service boats that depart from the European side at Kabataş every hour between 13:00 and 18:00 (only on weekends).

Private Tours: Our partner Istanbul Welcome Card offers a 1-hour cruise by yacht departing from the European side, which won't take you directly to the island, but will circle around the Maiden’s Tower, thus bringing you up close to the iconic landmark.

What is the story of Maiden's Tower in Istanbul?

Maiden's Tower, one of the most important monuments in Istanbul, is subject to many legends and tales. Its Turkish name "Kız Kulesi", meaning "Maiden's Tower", goes back to a folk tale about a princess whose death by snakebite was foreseen by a prophetess. Immediately, the king had a tower built in the middle of the Bosphorus to protect his daughter from her fate. But a fruit basket, in which the snake was hidden, got to her. The princess died just as the oracle had predicted.

How do you get to Maiden's Tower?

Maiden's Tower is located 180 meters from the coast of Üsküdar, on a small island in the middle of the Bosphorus. You can reach it via shuttle boats, which leave for the island from Üsküdar-Salacak (Asian side) every 15 minutes.

Alternatively, tower visitors can take the boats that depart from the European coast from Kabataş every hour on weekends between 13:00 and 18:00.

Another option is to take a one-hour boat ride from the European side of the city, which won't take you directly to the island, but will circle around the Maiden's Tower, offering plenty of photo opportunities and a close look of the legendary tower.

Where is Maiden's Tower?

Maiden's Tower is located 180 meters from the coast of Üsküdar, on a small islet in the middle of the Bosphorus.

It is not known exactly when the tower was built, but it is believed that the Athenian general Alcibiades built a tower on this island around 340 BC to control the Bosphorus traffic. 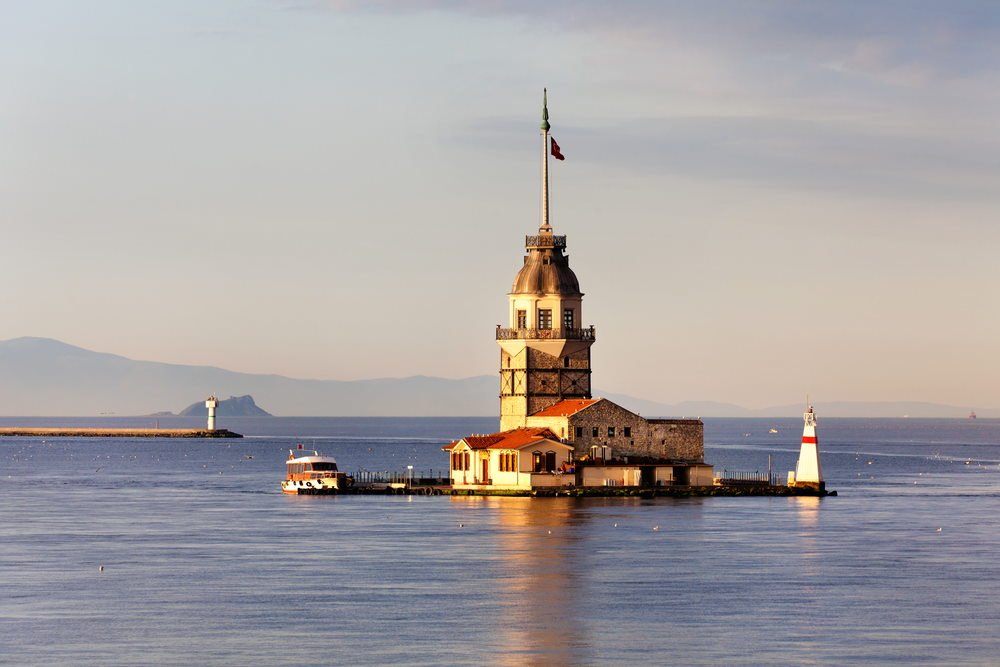 The history of the Maiden's Tower goes back to the 4th century. Although it is not known exactly when the tower was built, it is believed that the Athenian general Alcibiades constructed a tower on this island around 340 BC to control the Bosphorus traffic.

According to Byzantine chroniclers, the Maiden’s Tower was allegedly the place where one end of the big chain has been anchored, which was stretched during attacks on Constantinople over the Bosphorus. Throughout its history, the Maiden's Tower has served many different purposes. In Byzantine times, it was used as a custom station, in the Ottoman period as a watchtower, a lighthouse, and a radio station. In the 1830s, during the cholera epidemic, it even served as a quarantine station and hospital.

The Maiden's Tower got its present appearance in the Ottoman-Baroque architectural style after a major restoration in 1833. In the period from 1995 to 2000, the Maiden's Tower was greatly renovated and until recently served as a restaurant. In 2021, the Turkish Ministry of Culture and Tourism launched a new restoration project with the title "The Maiden's Tower opens its eyes again". Since the renovation work, the tower has been closed to the public. It is expected to open its doors again in April 2022. 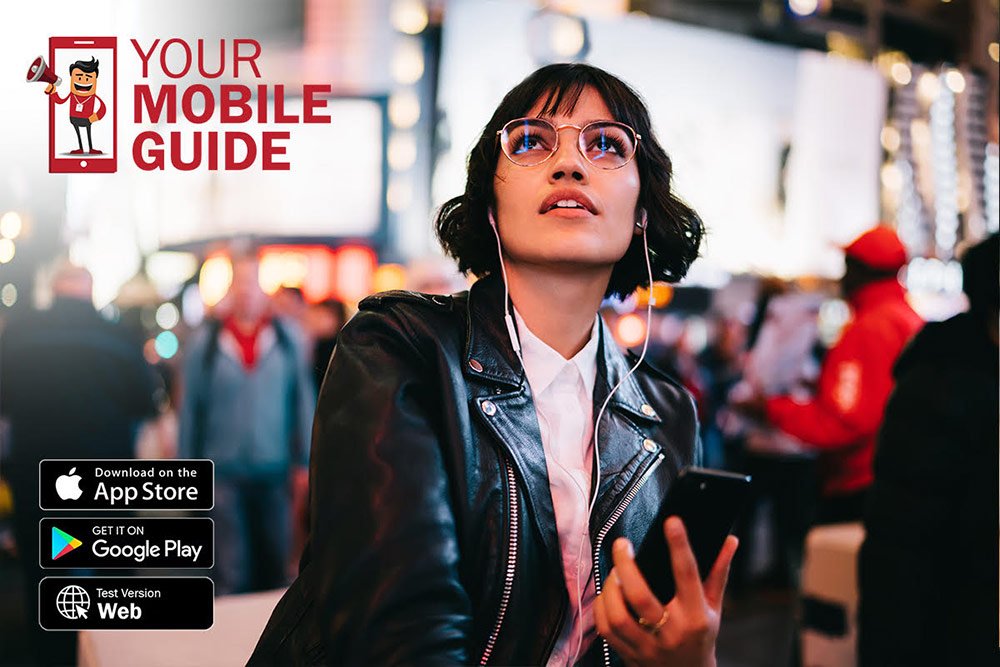 Audio guides are a great way to explore the highlights of the city at your own pace! This way you can get to know the city inexpensively, simply by using your mobile phone. YourMobileGuide is the best AudioGuide app for travelers. Just download the app, featuring self-guided tours written by local experts, a free city map, and exclusive discounts.

For your visit to Istanbul, YourMobileGuide has you covered with a variety of exciting self-guided audio tours. Visitors, who want to discover the highlights of the city by water, will enjoy the Bosphorus Tour from Eminönü & Karaköy.  The Audioguide will accompany you with exciting facts and entertaining commentaries about the attractions that are perched on both banks of the Bosphorus, including the iconic Maiden’s Tower.