Set on the southern banks of the Bosphorus, the sumptuous Dolmabahce Palace is one of the largest ottoman palaces in Turkey.

It served as the residence of the Ottoman sultans during the final era of the Ottoman Empire and is now one of the top attractions of Istanbul. Famous for its excessive pomp and luxury, a visit to the palace brings back to life the imperial splendor of the Ottoman dynasty.

Read in this guide everything you need to know before your visit, including the history and entrance, tickets & hours.

This is a Skip the line fast track ticket to Dolmabahçe, with audioguide and highlight tour with a historian guide. 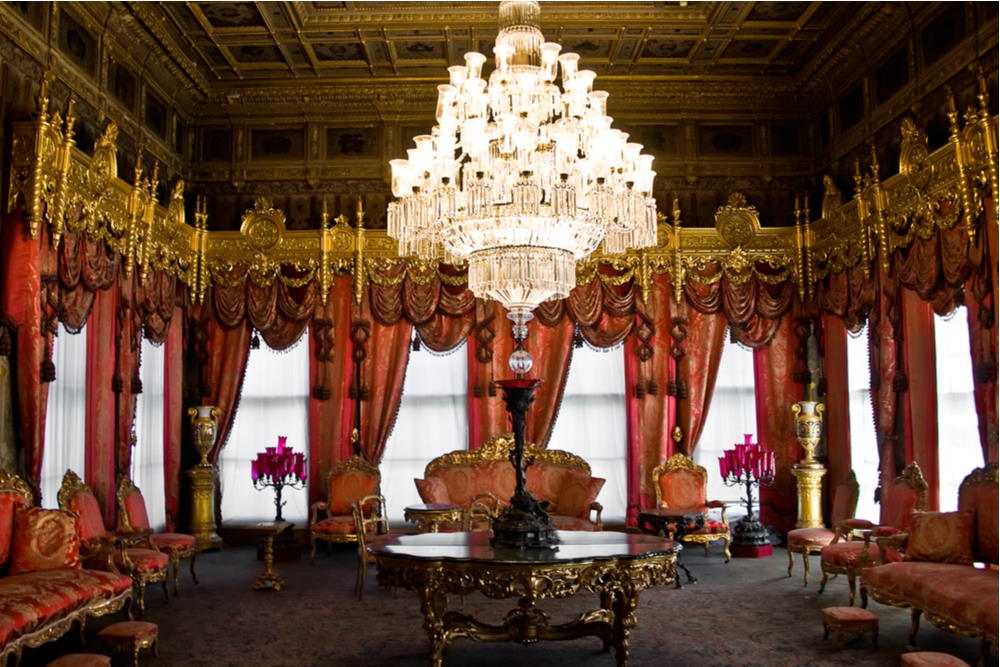 Things to do at Dolmabahce Palace

Constructed in the mid-19th century, the magnificent Dolmabahce Palace was not only the administrative center of the last six Ottoman sultans but also the presidential residence of Mustafa Kemal Atatürk, the founder of the Turkish Republic.

Hosting many important figures throughout its history, Dolmabahce Palace is now a museum and one of the most visited sights in Istanbul. More than 50,000 objects, presented in hundreds of rooms, reflect the grandeur of the Ottoman period.

See below its highlights you should not miss on your visit:

Great attention is drawn by the unique architecture of the opulent palace. Dolmabahce Palace that replaced the medieval Topkapi Palace as the seat of Ottoman sultans covers an area of 45,000 square meters and consists of 46 halls, 285 rooms, 6 hammams and 68 toilets. It also includes two museums, the Dolmabahçe Mosque and a clock tower.

Built by the famous Ottoman-Armenian architect Garabet Balyan, who had a European education, the 600-meter-long building is characterized by its eclectic design featuring elements from baroque, rococo and neoclassical influences, which blend with traditional Ottoman architecture.

While you wander through the lavishly decorated rooms and corridors of the official Selamlık section, pay attention to the décor that was intensively based on western style.

Marvel at the great collection of European antiquity, lavish furniture, beautiful paintings, and handmade silk carpets. Glass and crystal decorations, marble staircases and gold leaves can be admired on every corner of the palace.

First, you enter the Medhal Hall, the main entrance hall of Dolmabahce Palace. Worth seeing are the Hereke Carpet and the royal monogram of Sultan Abdülmecid. Next is the Clerk's Hall, adorned with precious porcelain vases, valuable paintings and French style furniture.

One of the most magnificent rooms of the Selamlık is the Ceremonial Hall (Muayede Salonu), used for state ceremonies, balls and celebrations. Here you can see one of the palace’s most spectacular items, the famous 4.5 tons crystal chandelier, the largest chandelier in the world.

Another room you should look out for is the Süfera Hall, also known as Ambassadors’ Hall. This glamorous room, where the ambassadors were received and entertained, is one of the most important protocol rooms in Dolmabahce Palace.

Not only Topkapi Palace has a Harem, Dolmabahce Palace also houses one. Since the Harem was the private residential area of the Sultans and the royal family, it is isolated by the Selanık section. The Harem has a separate entrance, which is located on the narrow southern wing. Visitors who want to visit this part of Dolmabahce Palace needs a dedicated ticket.

Inside the Harem, you can visit the apartments of the royal family, which transport you back to the Ottoman times. Here are the chambers of the Sultan’s Mother, concubines, wives and favorites of the sultan.

The harem is also home to one of the most important rooms of the palace, especially for the Turkish people. Here you can find the Room of Atatürk, who spent his last days in a bedroom in the former Harem and died on 10.11.1938. Notice that all clocks in the palace have been set for 09:05, the time he passed away. 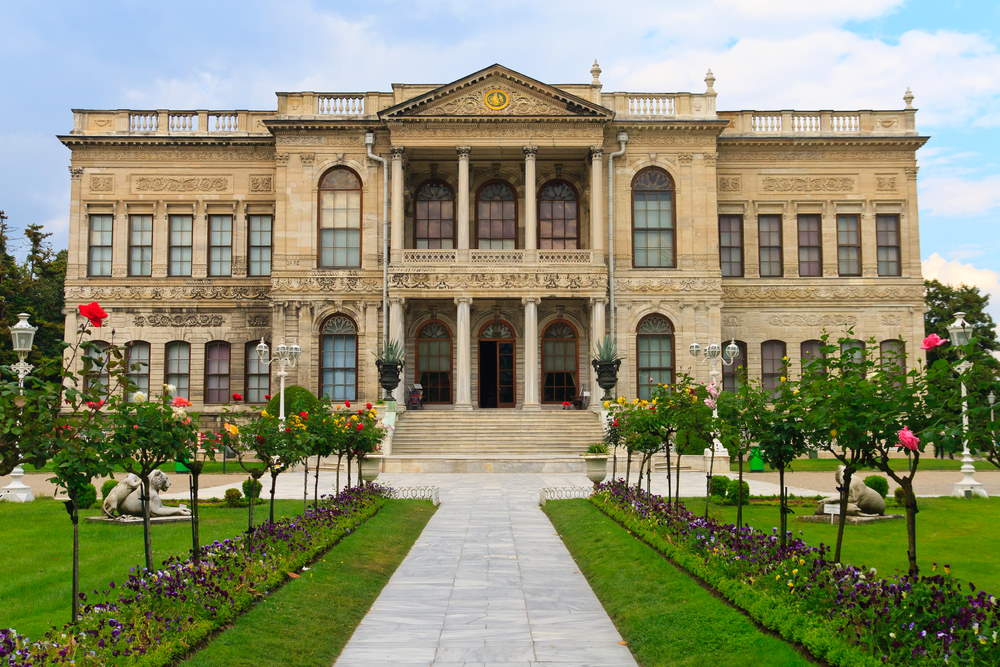 A must-see for any visitor are the picturesque Palace Gardens. They are divided in four sections: Selamlık Garden (Hasbahçe), Crown Garden, Bird Garden (Kuşluk), and Harem Garden.

The Dolmabahce Gardens are a true masterpiece with their natural beauty and tranquility. Walk along exquisite marble pools, beautiful statues and geometric hedge formations and admire the influence of European garden design.

Explore the plant diversity, which reaches from magnolia, cedar and pine trees to rare plants from Asia and America. You can even encounter peacocks, ducks and many other animals. The gardens also house several greenhouses and the Clock Museum, as well as the Painting Museum.

With its beautiful location at the Bosphorus, you can also enjoy a unique view of the famous strait.

Marvel at the impressive clock collection, which features 71 Ottoman, British and French clocks from the 18th and 19th centuries.

The collection, previously kept in the storerooms, came to light with the opening of the Clock Museum. It has been open to visitors since the renovation of the former Interior Treasury Building in the Harem Garden of the Dolmabahce Palace.

Art lovers should pay a visit to the Painting Museum. It is housed in the Veliahd Residence, which has been turned into a museum after seven years of restoration work. Most of the paintings were previously stored in the Crown Prince Room of the Palace.

The Painting Museum is made up of 11 sections in thematic integrity. Surrounded by a noble setting, you can enjoy about 200 works by Turkish and international artists of the 19th century.

Note: Entrance to this museum is not included in the regular Dolmabahce Palace Ticket.

Be sure to take a look at the magnificent gates of the palace, which are decorated with golden leaf appliqués and inscriptions. The ornate gates, especially the ones overlooking the sea, are a popular backdrop for pictures.

In total, there are 10 gates, but the most stunning ones are the Treasury Gate at the entrance of Dolmabahce Palace and the Sultanate Gate overlooking Dolmabahce Avenue. Both are adorned with tugras (signature of the sultan) and popular photo motifs.

Don’t miss the clock tower in the middle of the square, next to Dolmabahce Palace. Built under Sultan Abdülhamid II in 1895, it is considered one of the most famous clock towers in Turkey. It shows not only the time, but also the weather. The clock tower is now a popular photo spot. 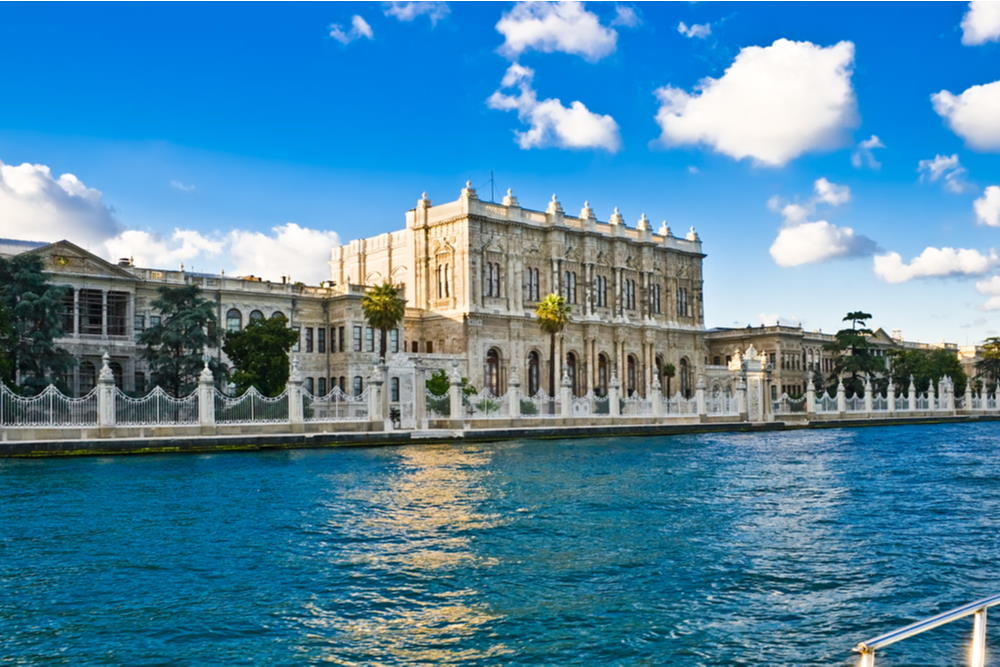 How to get to Dolmabahce Palace?

Dolmabahce Palace is situated in the Besiktas district, on the banks of the Bosphorus, and therefore easy to reach.

From Taksim: The easiest way to reach Dolmabahce Palace is to walk about 10 minutes to the tram stop “Fındıklı Mimar Sinan Üniversitesi” and take tram line T1. Go 3 stops to the Kabataş station. From here, it is only 4 minutes.

From Sultanahmet: Take the tram T1 and go 7 stops to Kabataş station. From here, it is just 4 minutes.

How much time should I plan to visit Dolmabahce Palace?

Being one of the largest palace in Turkey, you should at least plan 1 to 2 hours to visit Dolmabahce Palace. If you want to see all parts of the palace, you should expect 3 hours.

When was Dolmabahce Palace built?

The construction of Dolmabahce Palace began in 1843 under the orders of Sultan Abdülmecit I and was completed in 1856.

How to get to Dolmabahce Palace?

Dolmabahce Palace is located in the Besiktas district, on the banks of the Bosphorus. From Sultanahmet, you can reach it by tram T1, going 7 stops to Kabataş station. From here, it is just 4 minutes.

The easiest way to get there from Taksim is to walk about 10 minutes to the tram stop “Fındıklı Mimar Sinan Üniversitesi” and take tram line T1. Go 3 stops to the Kabataş station. From here, it is only 4 minutes.

Dolmabahce Palace is one of the most visited monuments of Istanbul and definitely one of the must-sees of the city. Today, the historical palace functions as a museum and presents over 50,000 objects in hundreds of rooms, giving visitors an impression of the splendor of the Ottoman period.

Inside, visitors can admire the great collection of European antiquity, lavish furniture, beautiful paintings, and handmade silk carpets. Glass and crystal decorations, marble staircases and gold leaves can be seen on every corner of the palace. The huge complex also houses a Harem, two museums, the Clock Museum and the Paintings Museum, a clock tower, a mosque and magnificent gardens. 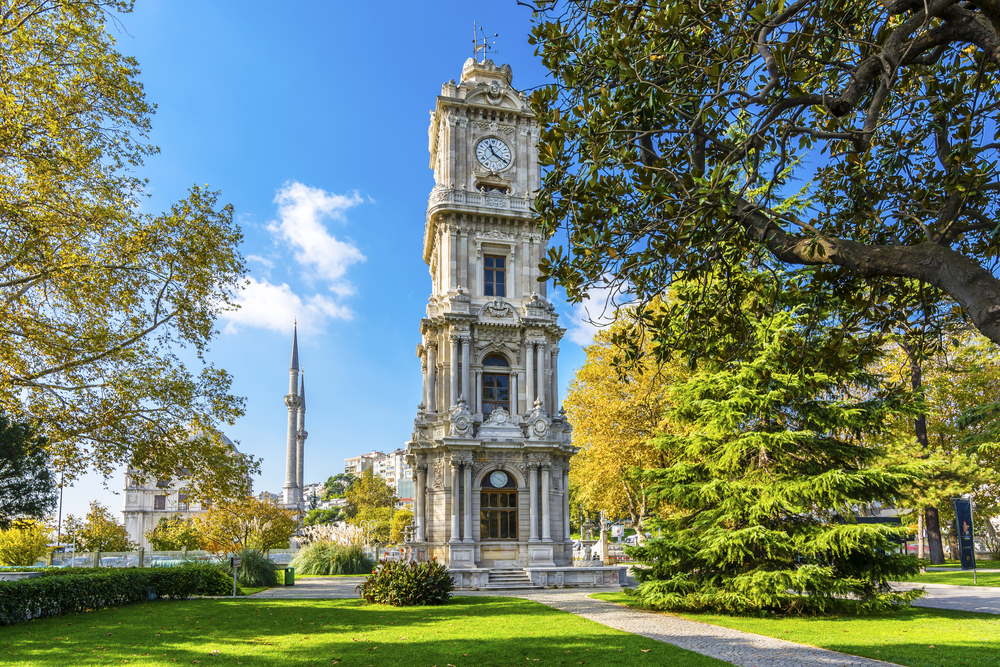 Originally, Dolmabahçe was a bay. The harbor granted anchorage to Ottoman fleets, but was also used as a venue for ceremonies. In the 17th century a royal garden with summer residences and several small pavilions was built there. In order to create a summer retreat for the reigning Sultan Ahmet I, the earth of the neighboring hill was used to fill the site of Dolmabahçe. This is the origin of the name “Dolmabahce”, which means "filled garden".

After the intensification of contact with Europe in the 18th century, the cultural standards were adopted from there. Thus, the main residence of the Sultan should be in contemporary style and luxurious, just like the palace of a European monarch. Therefore, Sultan Abdülmecit I ordered the construction of a new, luxurious palace to replace the Topkapi Palace. The construction, which cost five million Ottoman gold lira, equivalent to 35 tons of gold, began in 1843 and was completed in 1856. The administration and military of the Ottoman Empire then moved to the “New Town” along with thousands of people, but state officials continued to reside in the “Old Town” at Topkapı Palace.

Dolmabahce Palace was home to six Sultans. After the collapse of the Ottoman Empire and the following proclamation of the Turkish Republic in 1923, the palace was used by Atatürk as a seat of government until the administration was moved to the new capital, Ankara, and later as his residence. After Atatürk’s death, Dolmabahçe Palace was renovated and converted into a museum. However, it is still used for official functions such as state visits. For your visit to Istanbul, YourMobileGuide has you covered with a variety of exciting self guided audio tours. Visitors who want to discover the beauty of Istanbul from the water should not miss the Bosphorus cruise from Kabataş. Admire top sights like Dolmabahce Palace while cruising, and listen to the audio guide that provides entertaining commentary during the idyllic cruise.

Beylerbeyi Palace – A Pearl of the Ottoman Period

Küçüksu – The small palace on the Bosphorus shore

Aynalı Kavak – A Summer Palace on the Golden Horn