The majestic Topkapi Palace served as the administrative and educational center of the Ottoman Empire for about 400 years. Today, it is a museum and one of the most famous and visited tourist attractions of Istanbul.

Covering an area of around 700,000 square meters, the oriental palace resembles an open-air museum that showcases the glory of the Ottoman dynasty. A highlight is the legendary Harem section, filled with intriguing stories...

In this guide, find helpful information for your visit to Topkapi Palace, including its history, how to get there, tickets and entrance fees. 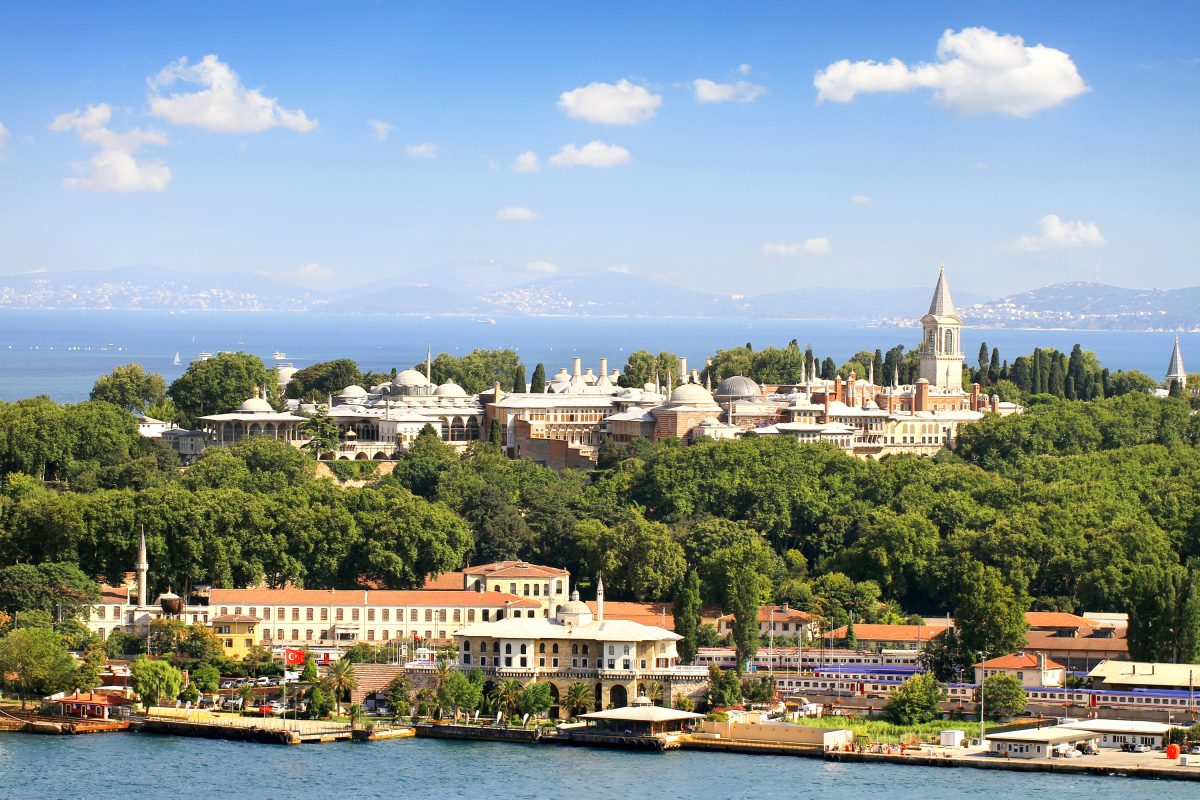 This is a skip the line tickets for Topkapi Palace, including an Audio Guide in 9 languages and a 30 minutes Guided Highlights Tour. 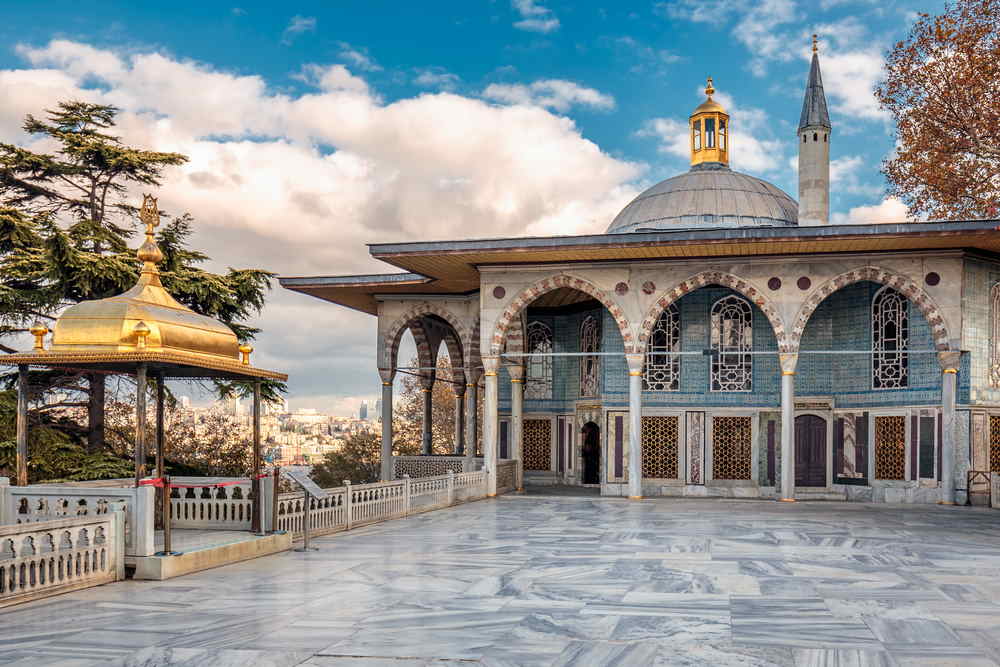 With fast track tickets and a personal guide by your side, you can enjoy a hassle-free experience of Istanbul’s finest attraction! 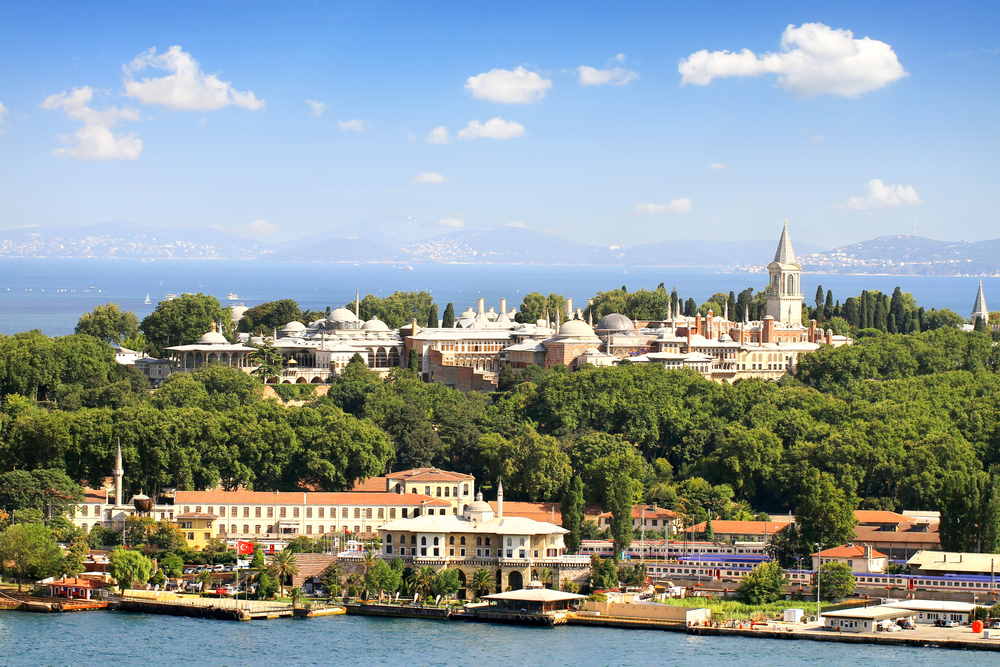 Things to do at Topkapi Palace in Istanbul

The magnificent Topkapi Palace is among the largest palace-museums in the world. It is divided into four courtyards, which are packed with history and outstanding exhibits.

You can easily spend half a day here wandering through the courtyards, exploring the palace's opulent architecture and discovering valuable Ottoman treasures, while getting an insight of how the sultans lived and ruled here. Visit nearly 500 years of eventful history and reward yourself with the magnificent views of the city and the Bosphorus, as the Sultans once did.

See here an overview of the four courtyards and their highlights: 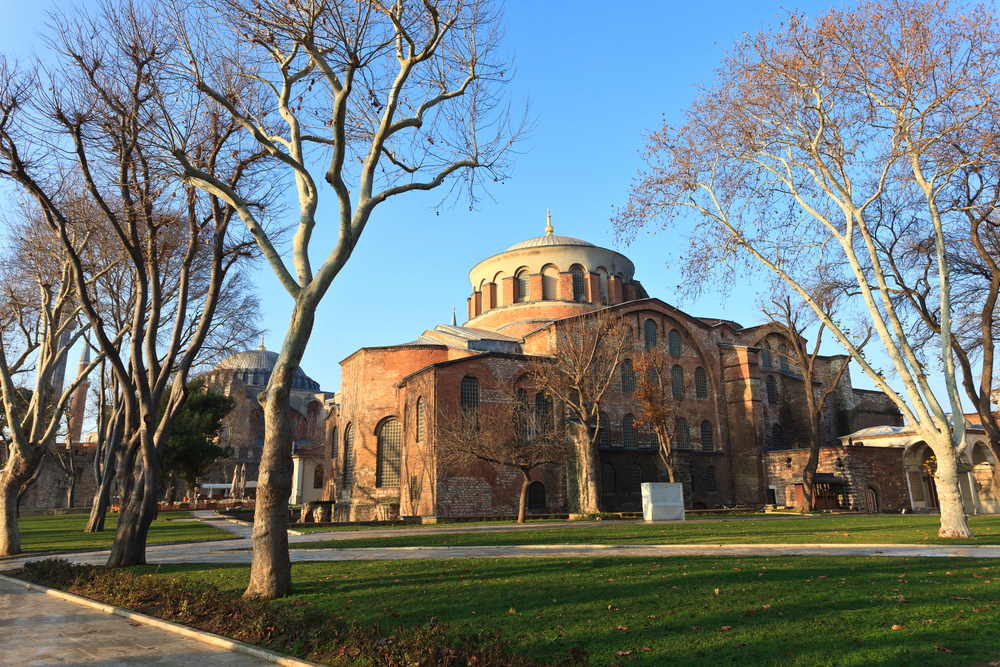 In the First Courtyard, the only part of the palace open to the public during the Ottoman period, ceremonies and processions took place. You can enter this courtyard even without a ticket. You will reach it by passing the beautiful Fountain of Sultan Ahmet III from 1729 and entering through the Imperial Gate, the main entrance to Topkapi Palace.

Of interest are the following structures: 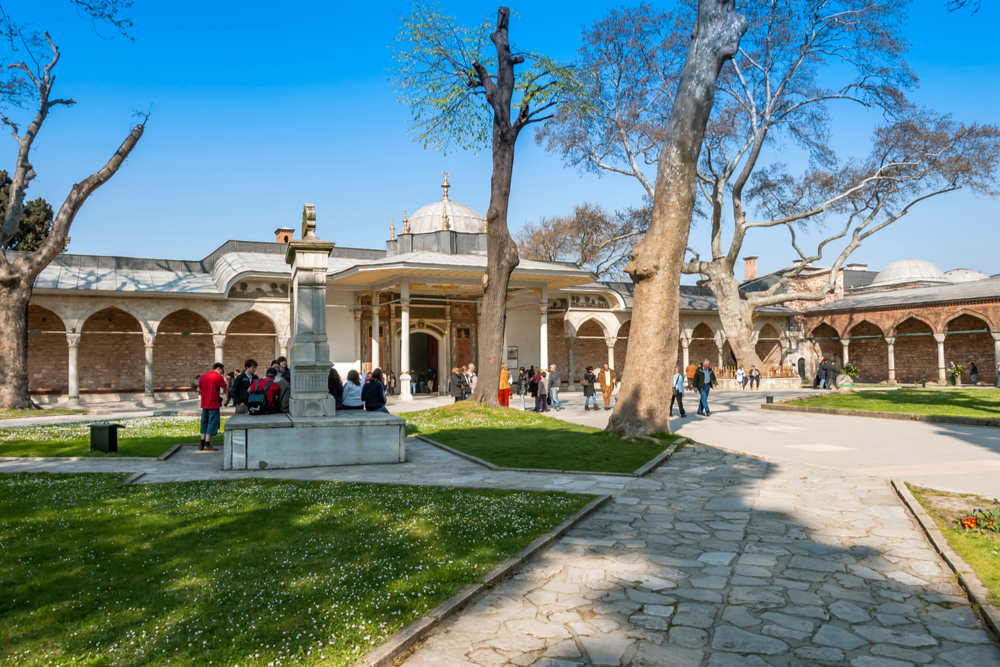 Through the second gate, the Middle Gate, you reach the heart of Topkapi Palace, where the administrative centers of the state were located. In this courtyard is also the Harem, which is of particular interest to many visitors, as well as the following remarkable buildings: 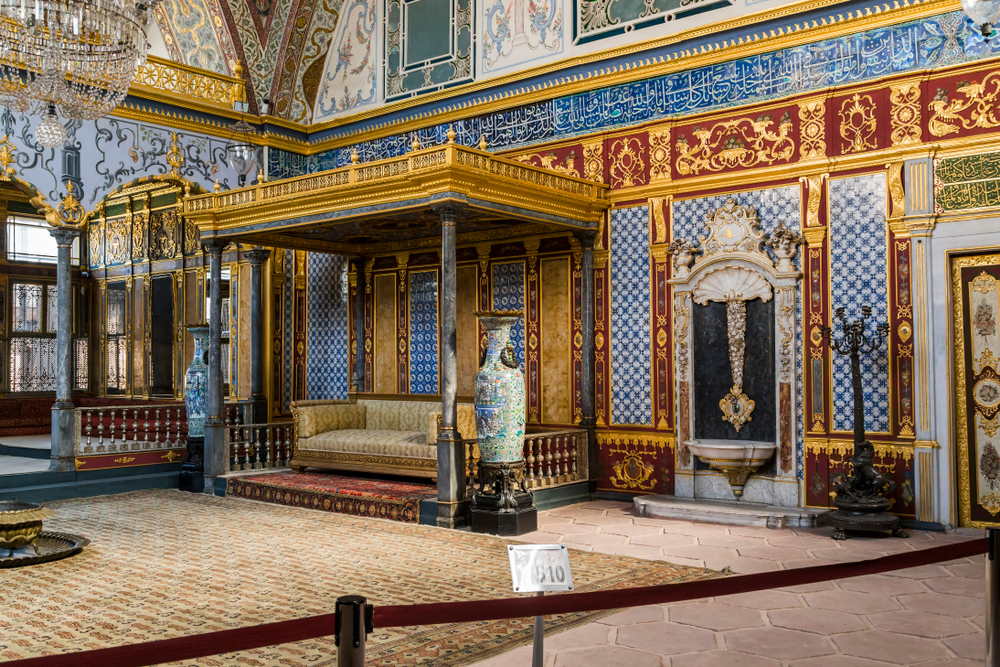 One of the ultimate highlight of Topkapi Palace is the mysterious Harem, the most secluded and private section of Topkapi Palace. You can find the entrance on the western side of the Second Courtyard, beneath the Tower of Justice.

The legendary Harem is where the sultans, the members of the royal family, including the Queen Mother, the sultan's wives, the concubines and the sultan's minor children lived. During its greatest expansion in the 18th century, the harem consisted of over 300 rooms, dormitories, nine bathhouses, two mosques, a hospital, and a laundry. Today, a part of this secretive world is open to visitors. Due to restoration work, the visitor route through the Harem is subject to change.

Be sure to take time to enter this mysterious world. You can stroll through the labyrinth of corridors, courtyards and chambers that hide many intrigues and fascinating stories within their walls. Follow in the footsteps of beautiful concubines, scheming favorites, dutiful Eunuchs, and the powerful Queen Mother, imagining what life in the Harem might have been like.

Admire the extraordinary architecture that reflects various styles from the 16th to the early 19th century. Of particular note is the ornate Privy Chamber of Sultan Murat III, the Apartment of the Queen Mother, the Throne Hall and the Fountain Hall. Marvel at some of the most masterful Iznik tiles with floral patterns and verses from the Koran, as well as extraordinary cabinet doors with tortoiseshell and mother-of-pearl inlays.

Please note that you will need to purchase a dedicated ticket to access this must-visit, but it is definitely worth it... 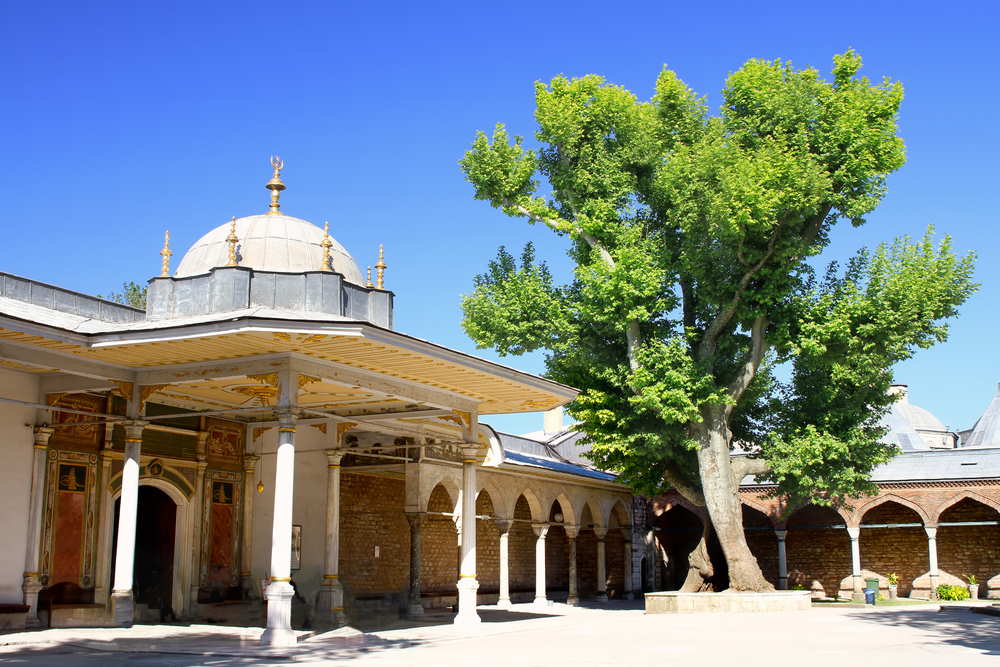 The Gate of Felicity will lead you to the Third Courtyard, the Sultan's private residence. The following attractions await you here: 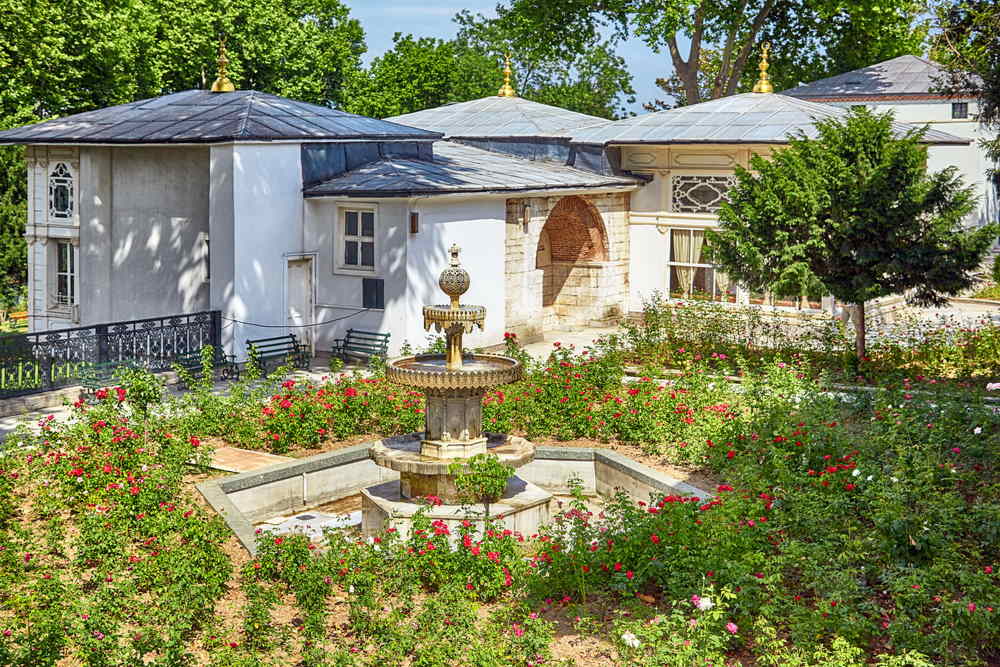 Now it’s time to enter one of the most beautiful places of the palace that is filled with many lovely pavilions, terraces and gardens: the Fourth Courtyard. You can expect the following highlights: 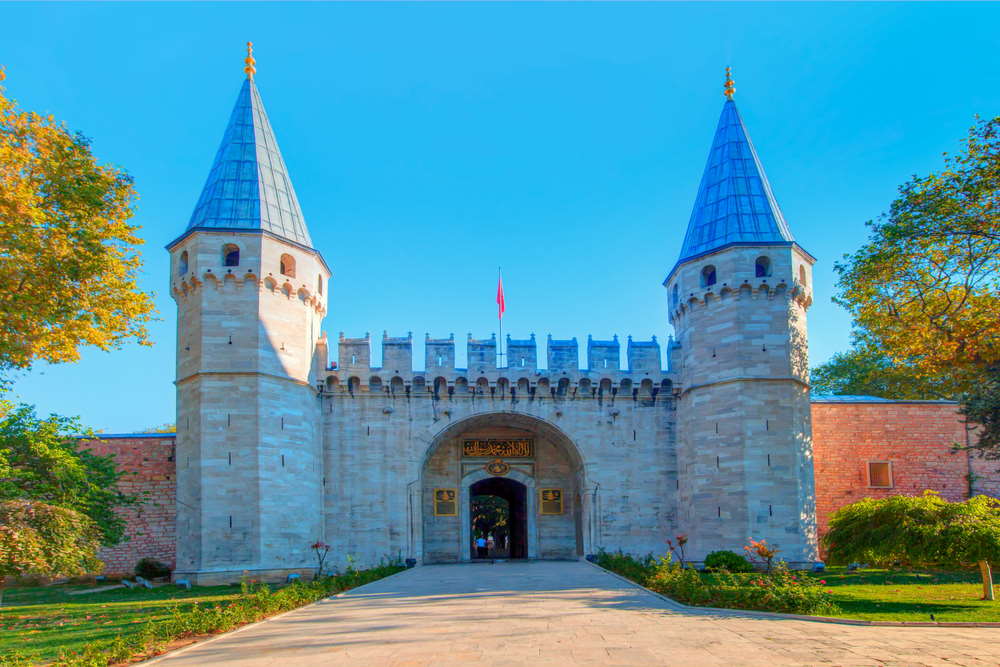 How to get to Topkapi Palace?

Topkapi Palace is located on the Historical Peninsula, in the Sultanahmet neighborhood of Fatih district, and therefore easy to reach.

From Taksim: The easiest way to get from Taksim Square to Topkapi Palace Museum is to take the funicular F1 to Kabataş. At Kabataş Station, take the tram T1 and go 7 stops to Sultanahmet Station. From here, it is just a couple of minutes to Topkapi Palace.

Where is Topkapi Palace?

Topkapi Palace is situated on the Historical Peninsula, in the Sultanahmet neighborhood of the Fatih district.

When was Topkapi Palace built?

Construction of Topkapi Palace started in 1459, only six years after the conquest of Constantinople by the Ottomans.

Sultan Mehmet the Conqueror, ordered the construction of Topkapi Palace soon after the conquest of Constantinople in 1453. The first part of the building was completed in 1468. Until 1478 the palace was enlarged again and again. All Ottoman rulers endeavored to expand and enrich the complex over the centuries. The palace got its current appearance at the beginning of the 18th century.

What are the Opening Hours of Topkapi Palace?

Topkapi Palace is open daily except Tuesdays from 09:00 to 18:00. You can check the current opening hours on the official website.

How much time should I plan to visit Topkapi Palace?

How big is Topkapi Palace?

The Topkapi Palace complex covers an area of about 700,000 square meters. This area is twice the size of the Vatican.

What can I see in Topkapi Palace?

The Topkapi Palace complex with its numerous pavilions, gardens, baths, mosques and reception halls is definitely worth a visit for its unique architecture alone.

In addition, the palace is now a museum and holds impressive collections. The treasures of Ottoman rule can be admired in hundreds of rooms in Topkapi Palace. This includes the Arms and Weapons collection, silverware, Chinese and Japanese Porcelains collection, Clock collection, the Palace Kitchen Utensils, collection of sultans’ clothing and paintings; and more.

Especially worth mentioning is the Imperial Treasury, as well as the holy relics of the Prophet Muhammad and other prophets.

Another highlight is the Harem section, which draws the attention of many visitors. 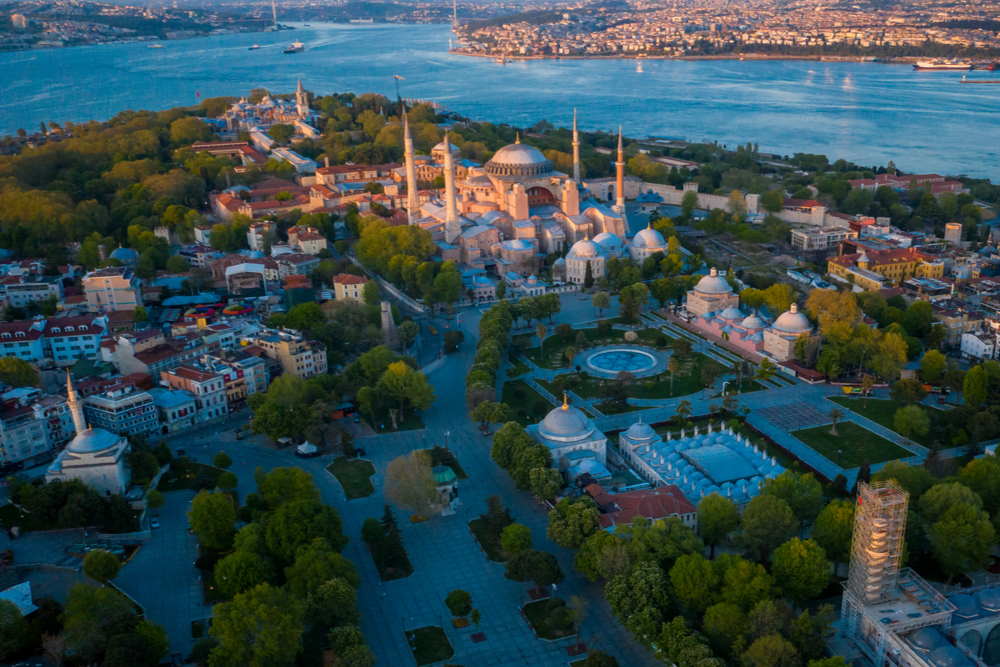 The name of the Topkapi Palace comes from the vernacular and literally means "Cannon Gate Palace". The mighty palace served as the former seat of government and at the same time as the residence of the Ottoman rulers.

Sultan Mehmet the Conqueror ordered the construction of the palace six years after the conquest of Constantinople in 1453, choosing this strategic location not only because it offered a wide view over the Sea of Marmara, the Golden Horn and the Bosphorus, and thus the best position for protection from enemies, but also because it was the exact spot where the Acropolis from the ancient city Byzantium stood.

The walls built by the Byzantines protected against the dangers from the water, starting from the eastern corner of the palace along the coast of the Sea of Marmara to the Walls of Constantinople.

The first part of the building was completed in 1468. Until 1478 the palace was enlarged again and again. All Ottoman rulers endeavored to expand and enrich the complex over the centuries. At the beginning of the 18th century, the palace got its present appearance.

When Sultan Abdulmejid I decided to build a new, European-style palace and eventually moved the court to the newly built Dolmabahçe Palace in 1856, Topkapi Palace lost its importance.

Since 1924, Topkapi Palace has served as a museum. Today, it is part of the Historical Peninsula, which is a UNESCO World Heritage Site. Topkai Palace is one of the most famous landmarks of Istanbul and a must-visit tourist attraction. 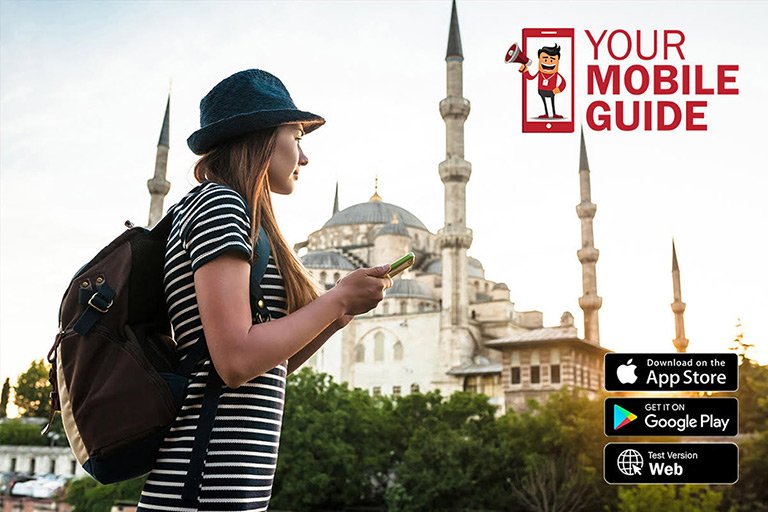 Audio guides are a great way to explore the highlights of the city at your own pace! This way you can get to know the city inexpensively, simply by using your smartphone. YourMobileGuide is the best AudioGuide app for travelers. Just download the app, featuring self-guided tours written by local experts, a free city map, and exclusive discounts.

For your visit to Topkapi Palace, YourMobileGuide's exciting Topkapı Palace Museum audio guide is ready for you. On this self-guided audio tour, you can follow in the footsteps of the Ottoman sultans. Stroll through the former center of power of the Ottoman Empire and discover the famous harem while learning about the history, precious treasures and former inhabitants.