Hidden beneath the houses and structures we see on the Historical Peninsula lies another mysterious world, Basilica Cistern.

Built in the 6th century by Byzantine Emperor Justinian I, it served as a water reservoir for the Great Palace. Located southwest of Hagia Sophia, the Basilica Cistern is one of Istanbul’s most spectacular museums and undoubtedly one of the top attractions you shouldn’t miss on your trip.

In this guide, you will find helpful information about visiting the Basilica Cistern, how to get there, tickets and more.

Tickets options for the Cistern Basilica of Istanbul Enter to the monument by the fast track entry and avoid waiting in line. Get a 30 min introduction of the place by an historian guide in English.

BUY HERE NOWand get a discount 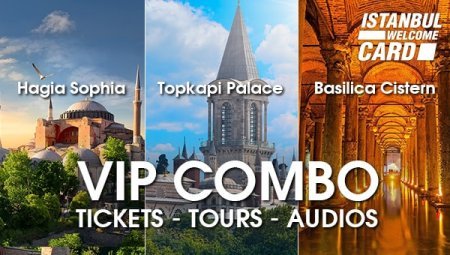 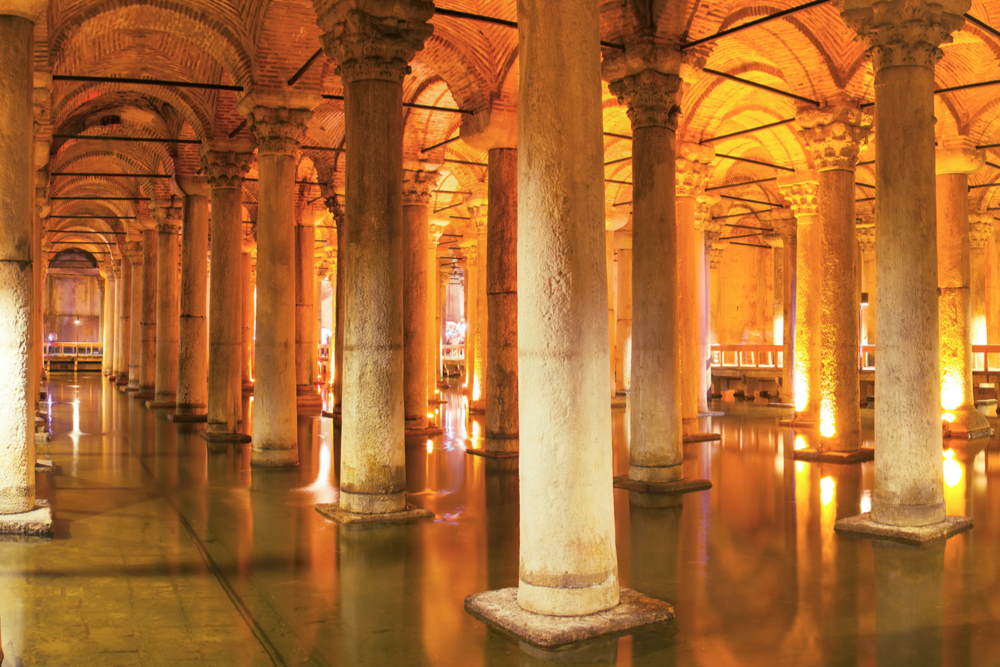 Things to do at Basilica Cistern

A staircase with 52 steps leads visitors into the ancient building, which covers a total area of 9,800 square meters. Here you can expect a quiet, mystical setting and a grand atmosphere.

See below the highlights you shouldn't miss:

After being closed for restoration in 2020, the Basilica Cistern reopened its doors to visitors in July 2022. The underground structure has not only been overhauled, it has also become more earthquake resistant.

Instead of the concrete walkway, a new pathway placed closer to the water's surface now guides visitors through the cistern. Since the renovation, visitors are also greeted by several new sculptures that rise from the water, adding even more character to the already mystical place.

In addition, the entrance hall of the cistern was remodeled, and new lighting was installed. However, the highlight for visitors should be the new exhibition on the theme of "Light". From now on, there will be light shows, which will undoubtedly make the extraordinary building an even greater spectacle.

Wander through the 1500-year-old site and take a trip back in time. The first thing you will surely notice are the marble columns. Bathed in an atmospheric light, they rise out of the water and support the 6th century construction.

Arranged in twelve rows, there are a total of 336 well-preserved columns. Each of the 9 meters long columns is unique, but most of them have a cylindrical shape and have Corinthian and early Byzantine features.

Breathtaking are also the reflections of the columns in the water. The spotlights cast the scenery in an almost magical light, evoking the feeling of being in a completely different world. While walking on the platform, you can hear the cold water splashing down from the vaulted brick ceiling. If you take a look into the water, you may be surprised to see fish, as there are usually numerous carp frolicking in the water.

Great attention is attracted by the two Medusa heads dating back to the Roman period. Look for the two ancient columns that bear at their base the snake-haired Medusa, a famous figure in Greek mythology. You can find both mysterious heads on the northwest side of the cistern. Note that the Medusa heads were placed upside down and sideways.

Although the exact reason for the placement of the Medusa heads is not known, it is believed that they were placed for protection, as it was a common practice in Ancient Greece and Rome.

Another column to look out for is the one engraved with tears, a Hen's Eye, and slanted branches. It is believed that the tears are a homage to the hundreds of slaves who died during the construction of the cistern.

Due to its fantastic acoustics and spectacular surroundings, the Basilica Cistern is also used as venue for events of all kinds. If you have the rare opportunity to attend a concert here, do not miss it!

With this breathtaking backdrop, it is hardly surprising that the Basilica Cistern has been the setting for several international films. Here you can relive the scenes from Dan Brown's "Inferno" starring Tom Hanks, James Bond's "From Russia with Love", "The International" with Clive Owen or "The Accidental Spy" with Jackie Chan, just to name a few. 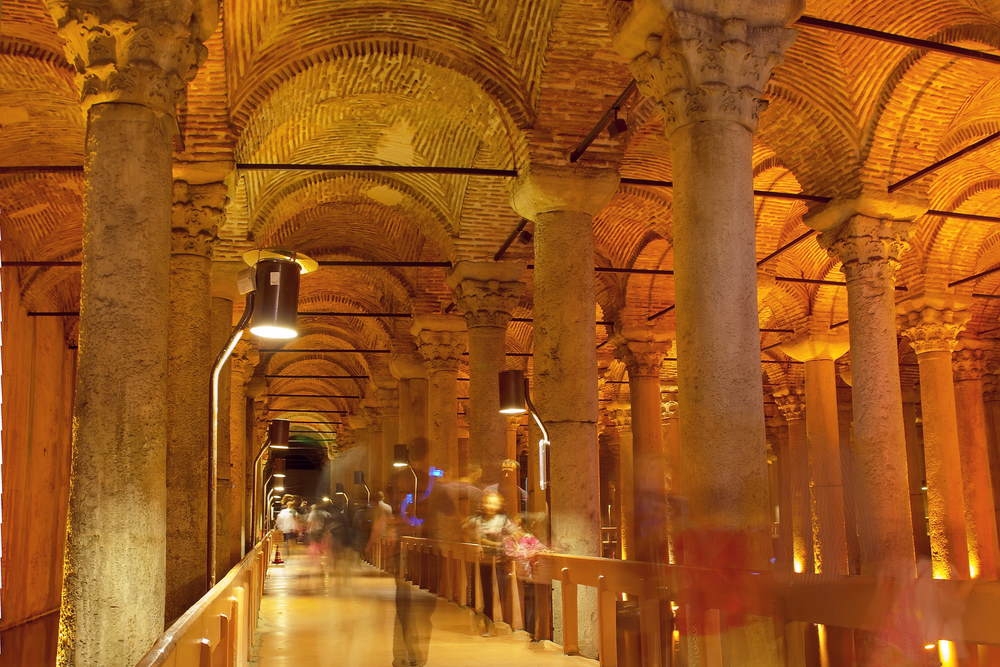 How to get to Basilica Cistern?

From Taksim: Take the funicular F1 to Kabataş. At Kabataş Station, take the tram T1 and go 7 stops to Sultanahmet Station. From here, Basilica Cistern is just 2 minutes away.

What is Basilica Cistern?

Basilica Cistern served as a water reservoir for the Great Palace, a large basilica located on this site in late antiquity. Today, it is one of the most visited tourist attractions of Istanbul.

The Basilica Cistern was built in the 6th century by order of the Byzantine Emperor Justinian I.

Where is Basilica Cistern?

Basilica Cistern is located in the heart of the Historical Peninsula in the Fatih district, just steps away from Sultanahmet Square and Hagia Sophia.

What are the Opening Hours of Basilica Cistern?

The regular Opening Hours of Basilica Cistern are daily from 9:00 to 19:00.

When will Basilica Cistern reopen?

Due to renovations, the Basilica Cistern was closed for two years, but has been open to visitors again since July 2022. 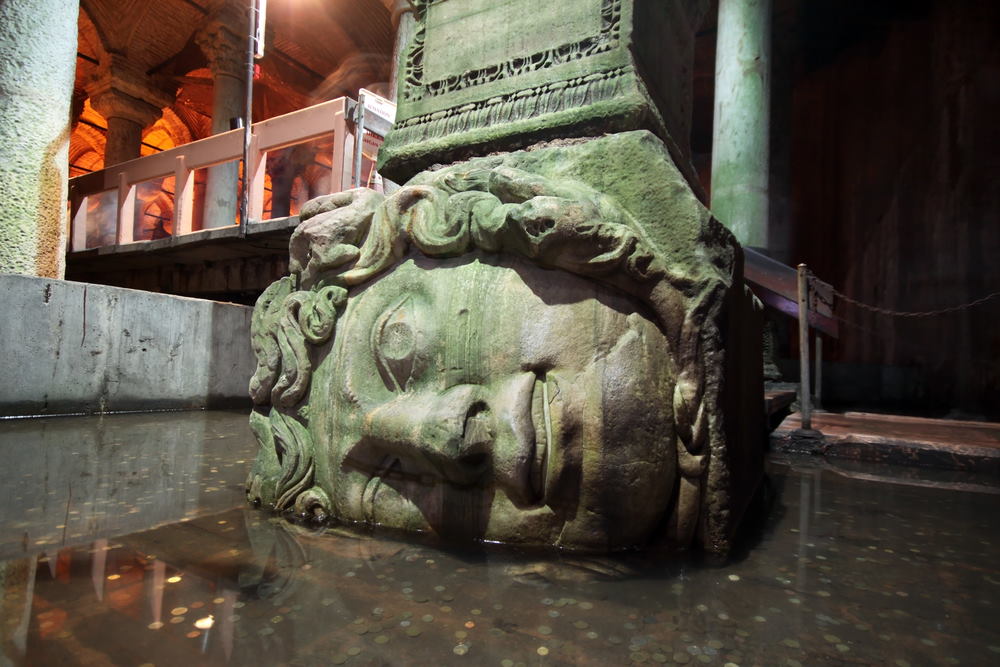 The Basilica Cistern (Yerebatan Sarnıcı in Turkish) was built in 532 by order of the Byzantine Emperor Justinian I. The underground cistern, almost 140 meters long and 65 meters wide, was built as a water reservoir for the Great Palace.

Above the complex, there was a large basilica, which is not preserved today, but which is responsible for its current name "Basilica Cistern". The imposing cistern has a capacity of holding 80,000 million liters of water. The water was brought here in the best quality from the north of Belgrad Forest and was used to supply the imperial household and other residents in the area.

It was not until 1987 that the Basilica Cistern was opened to the public after extensive repairs by the Istanbul Municipality. Today, the cistern is managed by the Istanbul Metropolitan Municipality Culture Co. Due to the risk of collapse, the cistern was closed for renovation in 2020. Since July 2022 it is open again for visitors and since then offers an exhibition and many other improvements. 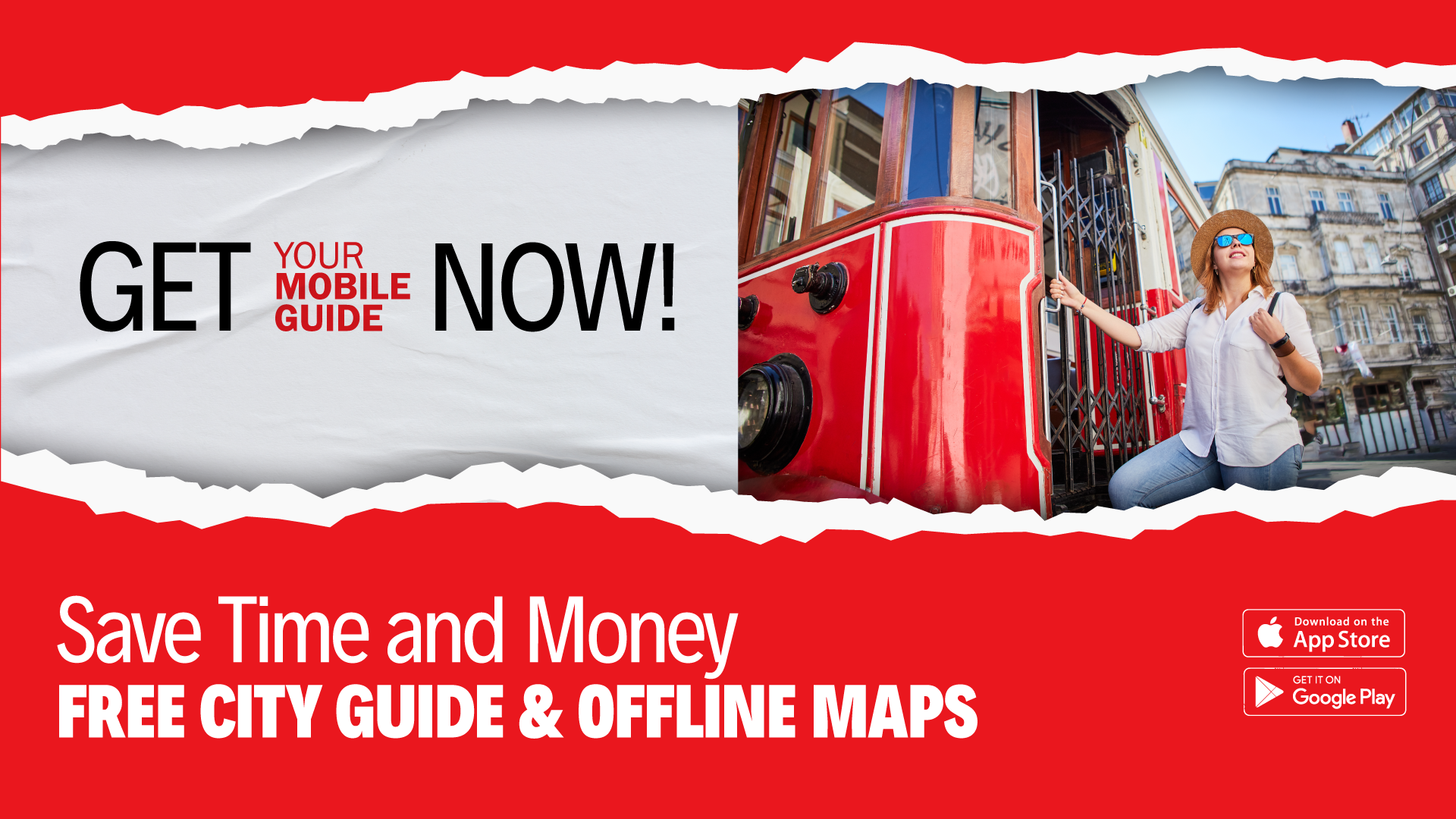 For your visit to Istanbul, YourMobileGuide has you covered with a variety of exciting self guided audio tours. First-time visitors will love the Best of Istanbul Tour, which guides you to Istanbul's most popular and important sights, including Basilica Cistern. Thanks to tips for traditional Turkish street food, you can also get an introduction to the culinary side of the metropolis...