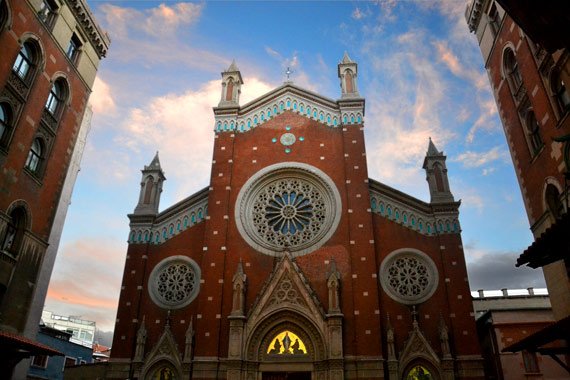 The Saint Antoine Church or St. Anthony of Padua Church, named after the Franciscan Anthony of Padua (1195 – 1231 AD), is located on the vibrant pedestrian street Istiklal Caddesi, between Galatasaray and Tünel.

The original building dates from 1725 and was replaced in 1912 after six years of construction with today’s Neo-Gothic red brick church. The architect was the Italian Giulio Mongeri, who was born in Istanbul. The forecourt of the church is entered from Istiklal Caddesi.

Saint Antoine de Padoue Church is run by Italian priests and is Istanbul’s largest church with the most important Catholic community.

In 1932, Pope Pius XI raised the church to the rank of basilica. Angelo Giuseppe Roncalli, later Pope John XXIII, preached here in the same year. In 1967, Pope Paul VI celebrated the first Holy Mass of a pope on Turkish soil in the basilica.

Other Places of Worship

Istanbul is home to over 3,000 mosques and new ones are constantly being added. From simple to monumental buildings, but also modern structures END_OF_DOCUMENT_TOKEN_TO_BE_REPLACED

The first synagogue in Istanbul was built in 318 during the Byzantine period.It was constructed in the Halkopratia district, which was inhabited by END_OF_DOCUMENT_TOKEN_TO_BE_REPLACED

There are numerous churches from different denominations in Istanbul such as Catholic, Lutheran, Orthodox, Armenian, Protestant and Syrian churches, which are used and END_OF_DOCUMENT_TOKEN_TO_BE_REPLACED