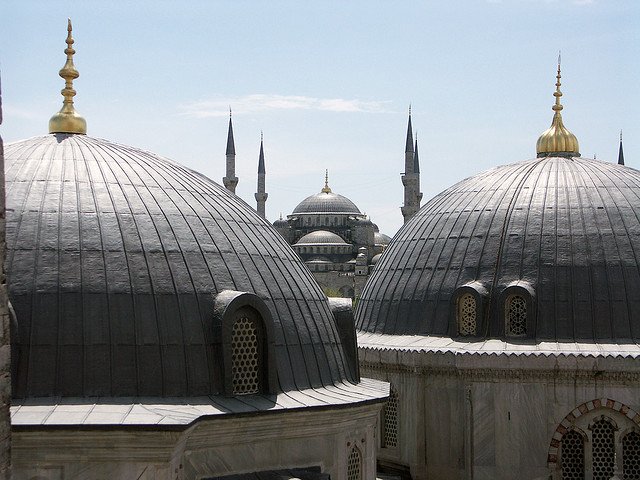 Istanbul is home to over 3,000 mosques and new ones are constantly being added. From simple to monumental buildings, but also modern structures adorn the skyline of the city.

There was no uniform style in Ottoman architecture. Simple mosques are usually small buildings with only one minaret, a narrow courtyard and the tomb of the founder. The mosques of Ottoman sultans, on the other hand, sit majestically on Istanbul’s hills and are impressive structures that enclose the outstanding central-plan buildings with their many domes and minarets. The multi-functional mosque complex includes a complex with commercial and charitable institutions that are part of the religious foundation (Külliye), as well as schools (Madrasa: “place of study” in Arabic) that teach Islamic Sciences. In addition, inner and outer courtyards, which are usually adorned with a central fountain (Sardivan) for ritual ablution before prayer, and mausoleums (Türbe) surrounded by beautiful gardens, are part of the complex.

While the 13th and 14th centuries are considered a phase of experimentation, the 16th century was the “classic period” of Ottoman architecture and is regarded as its heyday. The works of the great architect Mimar Sinan (around 1490 – 1588) are certainly the best examples of the fundamental architecture that can be found in the city. Sinan was the most important Ottoman master builder and lived during the era of powerful sultans such as Selim I and Suleyman the Magnificent. Sinan’s contemporaries as well as experts referred to him as Michelangelo of the Ottomans. From the 18th century, the mosques approach Western aesthetics: the facades are more fanciful and adapt to the styles of European art such as Baroque, Gothic and Neoclassicism.

Due to the religious prohibition against images in Islam, the interior of the mosques is characterized by geometrical and arabesques patterns, calligraphy and ornamentation, which are decorated with various handicrafts, such as stucco, carpet, stained glass and tiles. In view of the warm climate, the play of water, light and shadow is of particular importance. The most important element is the prayer niche (mihrab) facing Mecca.

The entrance to mosques is free. When visiting mosques, it is important to pay attention to appropriate attire as well as visiting hours, as mosques are only accessible to tourists outside of prayer times and the important Friday prayer. Men should cover shoulders and knees, so no shorts or sleeveless shirts. Women should also cover their hair. At the entrances of large mosques, scarves are usually provided for visitors. Before entering a mosque, shoes must be taken off. If you do not want to be barefoot, you should take socks with you.