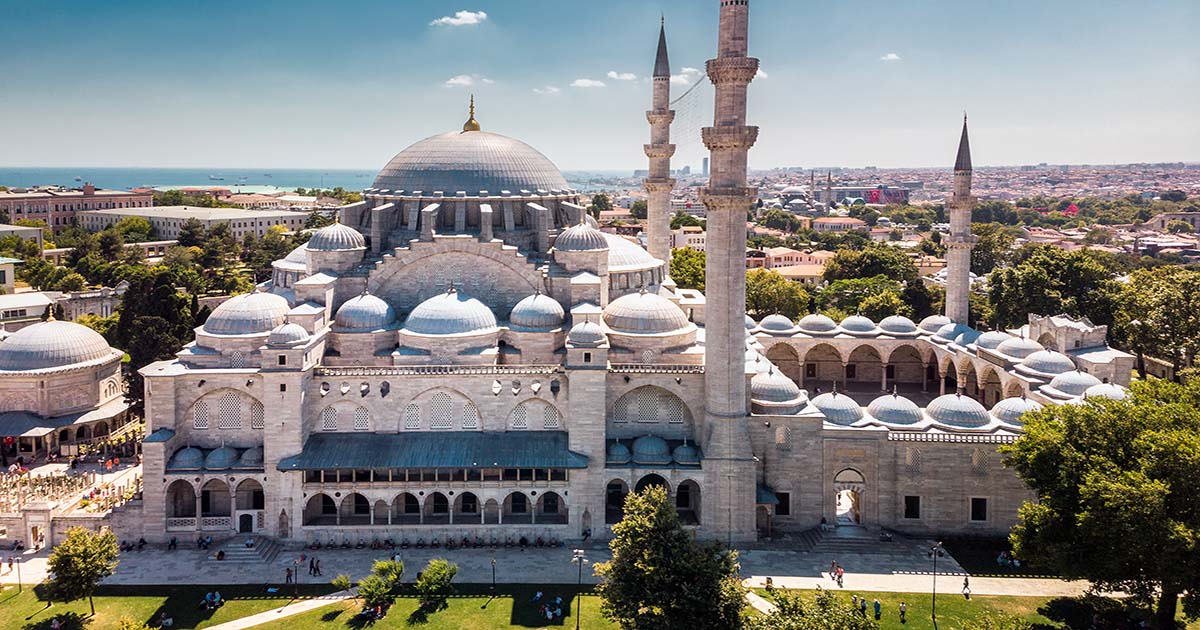 The Süleymaniye Mosque is one of the most magnificent mosques in Istanbul. Perched upon the third hill of the Old Town, it is considered a masterpiece by master builder Mimar Sinan.

Sinan began the construction work in 1550 and finished it in 1557. The Süleymaniye Mosque was commissioned by Sultan Suleiman the Magnificent. At the opening ceremony, Sinan told him that the mosque would stand upright as long as the world exists.

The mosque gives the impression of an independent city. Built in the midst of a giant garden, there is a courtyard with colonnades in front of the mosque. Behind is a large cemetery with the mausoleums of the sultan and his wife Hürrem, the sultan’s daughter Mihrimah and the sarcophagi of the two Ottoman rulers Ahmet II and Suleiman II. The mausoleum of the builder, is also located here, in the north-western corner of the complex.

The forecourt is surrounded by 24 pillars, on which 28 domes rest. Above the windows there are faïence surfaces with Arabic inscriptions, which quote suras from the Koran. Special attention was paid to the four minarets with a total of ten galleries, which were dedicated to Sultan Suleiman.

The Süleymaniye Mosque is the second largest prayer house in Istanbul. The main dome has a sensational height of 50 meters and a diameter of 27 meters. Two large arches, located on the north and south sides, are each supported by two red granite columns.

When you enter the interior, it seems surprisingly simple, but of breathtaking size. The walls are covered with beautiful Iznik faïence. Magnificent stained-glass windows decorate and illuminate the interior of the mosque exceptionally.

Another highlight is the mosque complex that was extended a little later. It is located outside the walled garden and includes social amenities such as a soup kitchen, a shelter, a hospital and a library with the world’s largest and most important collection of Islamic manuscripts.

Do not miss this national treasure during your stay in Istanbul. Our tip: If the staircase to the gallery on the northeast side is open, be sure to enjoy the spectacular view from the balcony!