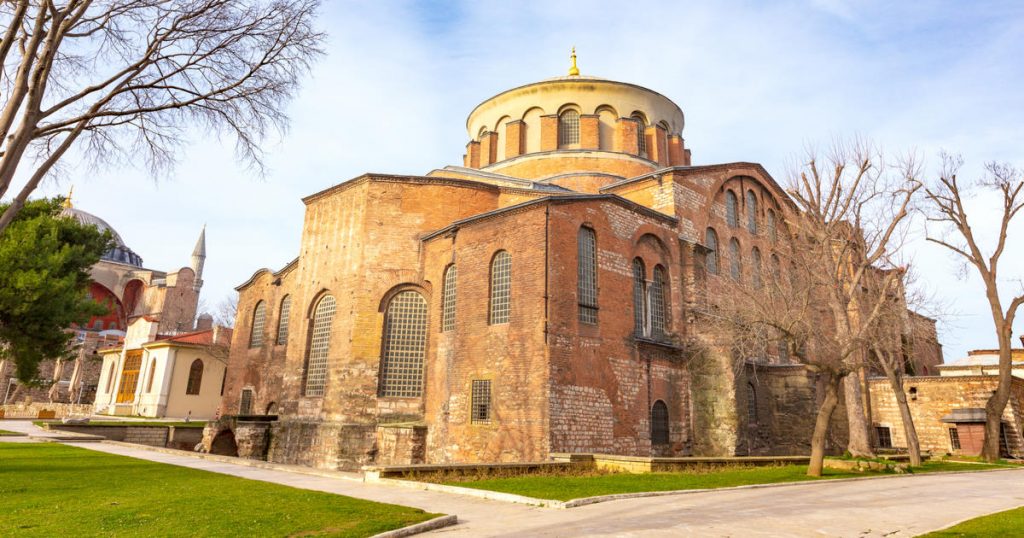 Hagia Irene – the “Church of Holy Peace” – is a 4th century Byzantine church in Constantinople, which was built over the ruins of a Roman temple that today mark the first courtyard of Topkapı Palace.

Its construction goes far back in time. Built for the first time on behalf of the Roman emperor Constantine the Great, it is the oldest church in the city as well as the oldest church of the Patriarchate. It was not until two hundred years later that the legendary Hagia Sophia was built. From now on, the Hagia Irene was the second largest church in the city but the only Byzantine church with an original preserved atrium.

The once most beautiful church of the Christians was the birthplace of the creed and a gathering place for many different occasions: Emperor Constantine I proclaimed his empire – the “Nova Roma” – here on May 11, 330. In 381, Emperor Theodosius held the First Council as well as the Second Ecumenical Council of Constantinople here. The church was also the scene of the bloody conflicts between Arians and Trinitarians during the Arian controversy.

After the Hagia Irene burnt down during the severe Nika revolt in 532, it was Emperor Justinian’s restoration, from which the church largely received its current appearance. After further riots and an earthquake in 740, original mosaics could not be saved. However, the apse, decorated with a giant cross on a golden ground, is one of the oldest surviving parts of the domed basilica. It is a unique testimony of iconoclastic art.

After the Ottoman conquest of Constantinople in 1453, the palace guard of the Janissaries used the Hagia Irene as an arsenal. The Marshal of the Arsenal, Ahmed Fethi Paşa, already set up a Turkish museum in the church in 1846. However, when in 1875 the space for further weapons exhibits was no longer sufficient, the collection was transferred to the Tiled Kiosk (Çinili Köşk). In 1869, the church became an imperial museum and in 1908 it served as a military museum for a while. Since 1973, the Hagia Irene has been used for classical concerts due to its remarkable acoustic atmosphere. Since 1948, however, it has been officially declared a museum and is under the authority of the Hagia Sophia Museum Directorate.