Visit our Online Shop and Get 5% discount!

To better understand the fascinating history of Istanbul, you should absolutely include several museums to your itinerary during your stay in Istanbul.

The historical museums of Istanbul include the Topkapi Palace and its harem, the Istanbul Archaeological Museums, the Dolmabahçe Palace where the leader Mustafa Kemal Atatürk died, or the mystical Cistern Basilica. A tour through the Turkish and Islamic Arts Museum right across from the Blue Mosque is also one of the classics in Istanbul.

All these museums with various themes, from science to maritime, makes us understand the contemporary side of Istanbul... Art lovers will have to visit the Istanbul Modern Museum, Pera and the Elgiz Museum. Technology fans can visit the Rahmi M. Koc Museum and the Museum of the History of Science and Technology in Islam.

Read more details about each museum below and get tours and tickets with the special 5% discount for our readers.

Benefit from the different touristic cards available, save money on your visits to museums and have a better experience with guided tours included.

All these cards are suited to improve your travelling experience in Istanbul. 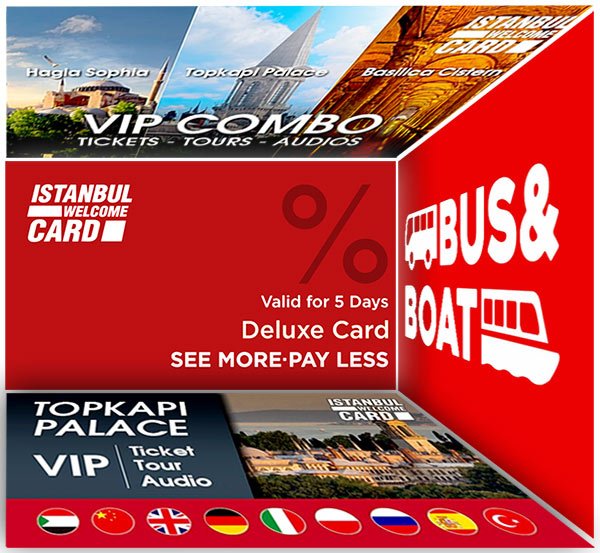 The Topkapi Palace is one of the most famous Istanbul tourist attractions and part of the historic peninsula which is a UNESCO World Heritage Site since 1985.

The construction of the Topkapi Palace began soon after the conquest of Constantinople in 1453 by Sultan Mehmet, the conqueror. The first part of building was completed in 1468. Until 1478 the palace was enlarged. The palace received its present appearance at the beginning of the 18th century.

This is the most exciting part about Topkapi Palace which was the most secluded and private section. Here was the home for Sultans, royal family members including the Queen Mother and underage children of Sultan, the concubines, favorites and wifes of the Sultan.

Originally there used to be about 300 rooms in Harem. Of course, today it is possible to see only some part of it. The life in Harem has been the subject of curiosity by Europeans for decades. Harem is hiding many intrigues and interesting stories within its walls. Make sure to create some time for this amazing section as you make your way to Topkapi Palace. 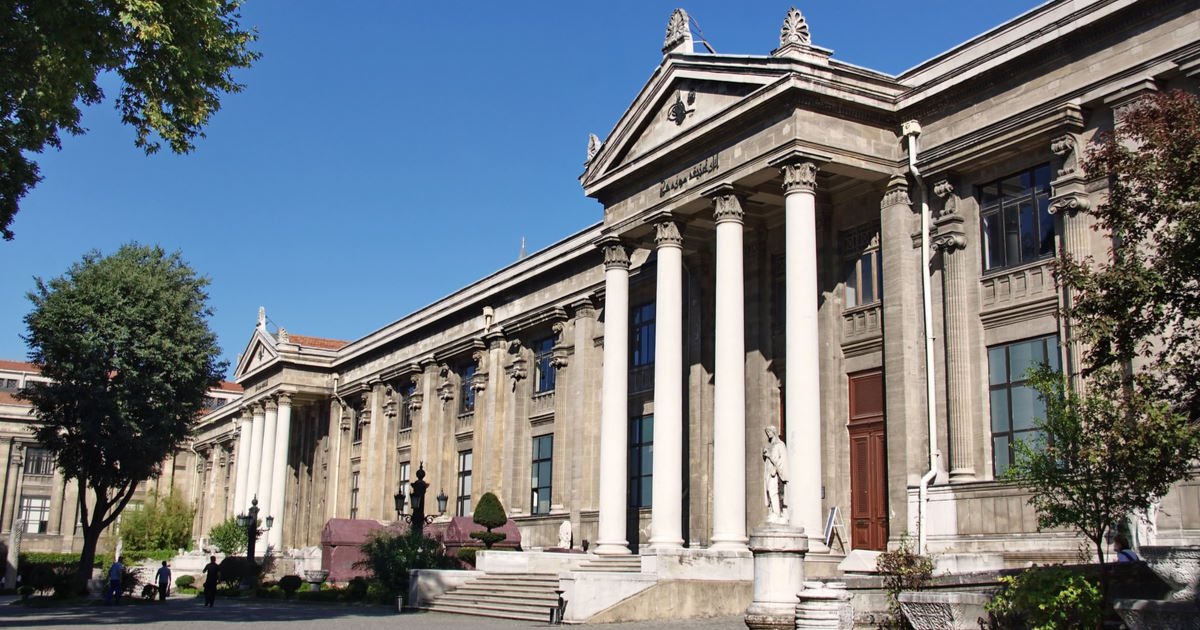 The Archaeological Museum was founded in 1891 and is today the largest and most important archaeological museum in Turkey.

It is located in the Eminönü quarter of Istanbul, near Topkapi Palace.

The Archeology Museum is divided into three parts. 1. The Archaeological Museum itself 2. The Museum of Ancient Near Eastern Art 3. The Museum of Islamic Ceramics (Çinili Köşk). In 1991 the museum was awarded the Museum Prize of the Council of Europe. A must-see if you are interested in seing historical artifacts from the Ottoman period. 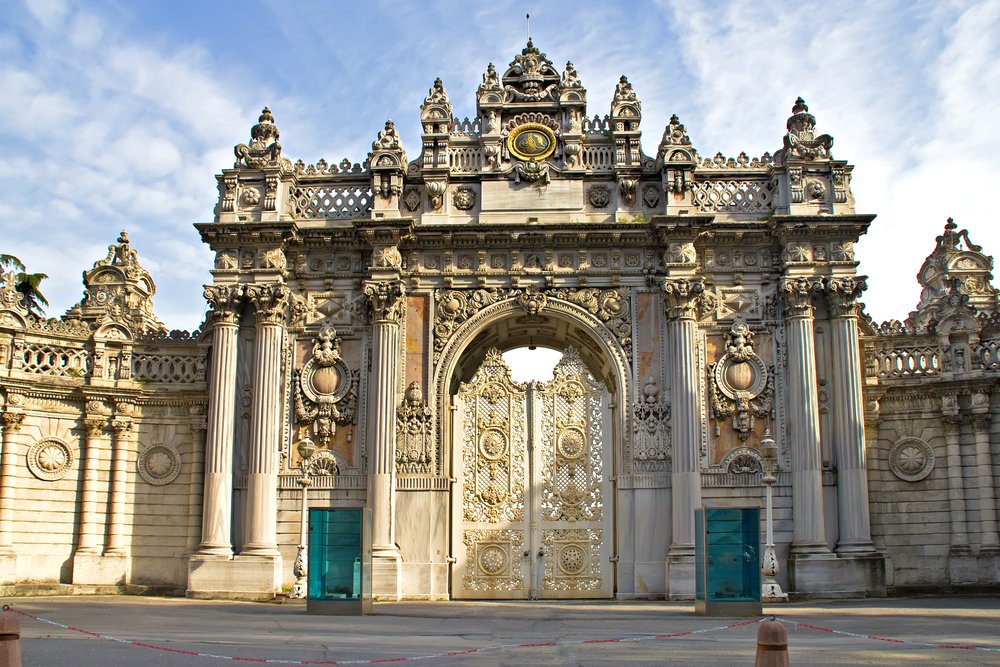 The magnificent Dolmabahce Palace on the banks of the Bosphorus served as the residence of the Ottoman sultans from 1856.

Inside the Dolmabahce Palace, visitors can marvel at the great collection of European antiquity, beautiful paintings, furniture, handmade silk carpets and the famous 4.5 tons crystal chandelier, which is the largest chandelier in the world.

The palace also has a very significant feature for the Turkish people as Mustafa Kemal Atatürk, founder of the Turkish Republic, who spent his last days here and died on 10.11.1938.

Tip: * With your ticket to “Selamlık “ section of Dolmabace Palace, you also get an entrance for the Clock Museum and Painting Museum in the garden of Dolmabahce Palace.

After seven years of restoration work a part of the Dolmabahce Palace Celestial Office has been opened as the "National Palaces Painting Museum". It consists of 11 sections in thematic integrity and displays about 200 pieces of Turkish and international artists of the 19th century.

71 Ottoman, British and French watches of the 18th and 19th century which were kept in the warehouses, came to daylight with the Clock Museum that has been opened after renovation works of the former Interior Treasury building in the Harem Garden of Dolmabahçe Palace.

Beylerbeyi Palace, the "Palace of the Lord of the Lords", is located on the Asian side of Istanbul and offers a wonderful view of the Bosphorus and the old town from the other side.

The palace was built under Sultan Abdülaziz between 1861 and 1865 and is one of the most important palaces of Istanbul.

Beylerbeyi Palace served as the summer residence of the Sultans and as a place to entertain foreign heads of state, including Queen Eugenie the wife of Napoleon III., Queen Elisabeth, the King of Montenegro, Shah Mohammad Reza Pahlavi and the Russian Grand Duke Nikolai Nikolayevich Romanov.

Visiting this palace is the best occasion for travelers to go to the other side of the Bosphorus, learn even more about the former empire and be amazed by yet another incredible monument. You shouldn't miss it ! 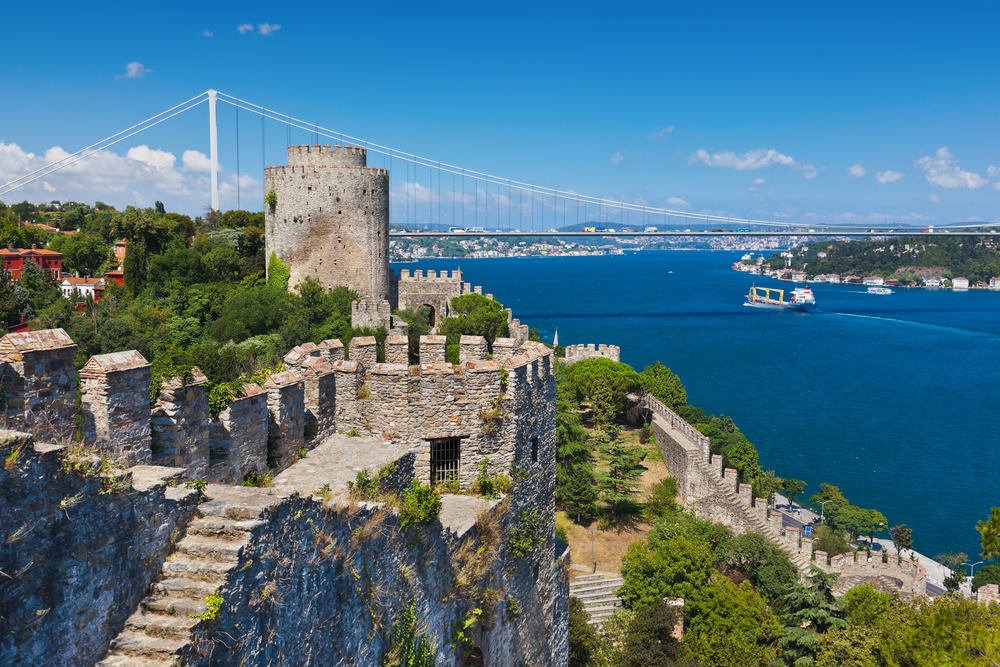 Fatih Sultan Mehmet II had this monumental structure built as part of its preparations for the siege of Constantinople.

Since an extensive restoration on the occasion of the 500th anniversary of the conquest of Constantinople in 1953, the fortress acts as a museum. The exhibition of the museum shows relics of the time such as cannons, cannonballs and the chain that was used to block the Golden Horn.

The atmosphere at the fortress is unreal and the view is breathtaking. This visit will be a peaceful moment spent outside of the Istanbul crowds. 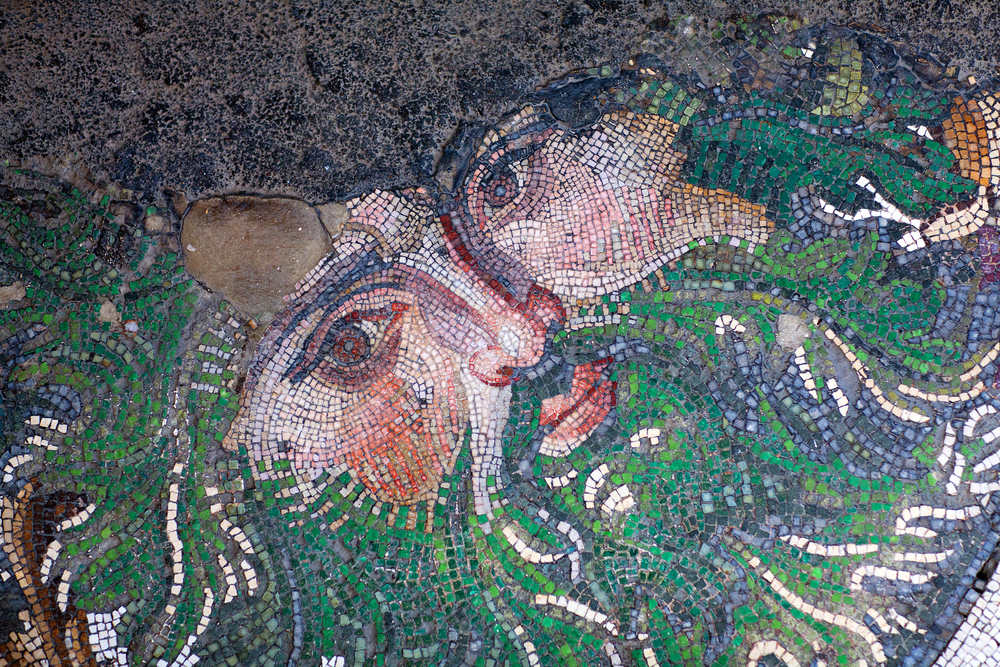 The Museum of Great Palace Mosaics is located at the Arasta Bazaar near the Blue Mosque, in the grounds of the Great Palace, former residence of the Byzantine emperors.

The mosaics were extensively restored and transported back to this place, where the museum was finally built. The impressive mosaics are from the Byzantine period around the years 450-550 AD and show mostly scenes from everyday life, mythology and nature.

Fans of delicate art who want to know more about how mosaics are made and preserved will love this museum. 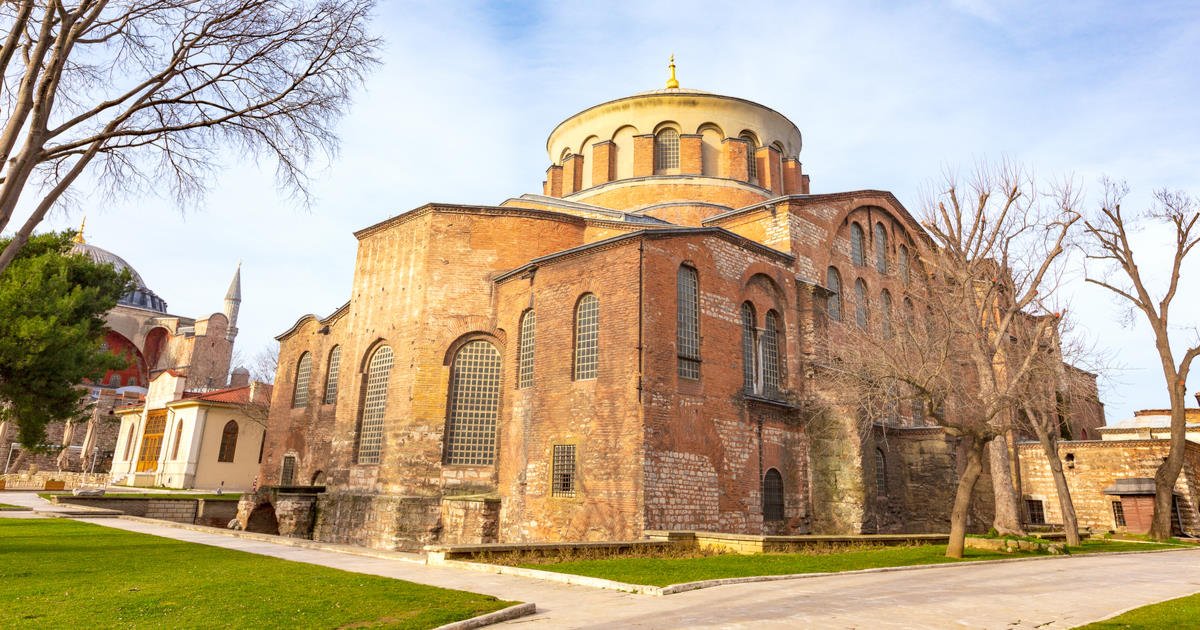 Hagia Irene is a former Byzantine church and today’s museum in Sultanahmet, on the grounds of Topkapı Palace.

This famous church in Istanbul is a UNESCO World Heritage Site since 1985.

The Hagia Irene is the only Byzantine church with an original preserved atrium. Since 1973, the restored architectural monument has been used for classical concerts for its impressive acoustic atmosphere.

8. Museum of History, Science and Technology in Islam 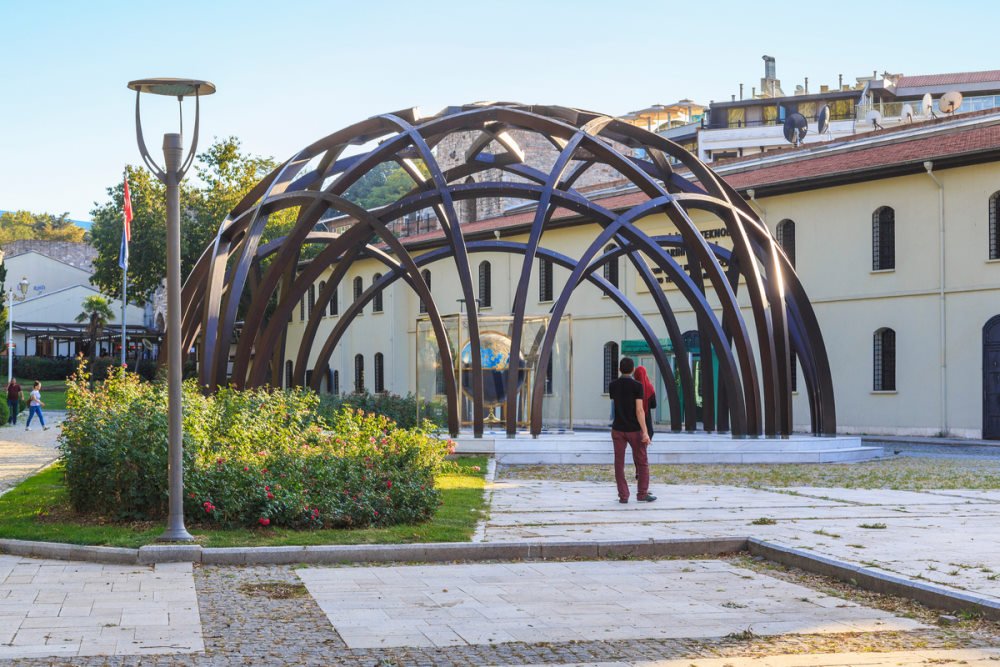 Opened in 2008, the Istanbul Museum of the History of Science and Technology in Islam is located in Gülhane Park below the Topkapi Palace, in the former stable building of the Sultan.

The collection consists of approximately 800 detailed reconstructions of discoveries and inventions of Arab-Islamic scientists of the 9th to 16th centuries. The exhibits are from the fields of astronomy, technology, physics, geography, mineralogy, chemistry, geometry, architecture, medicine, war technology and time measurement, which take the visitors on a unique journey 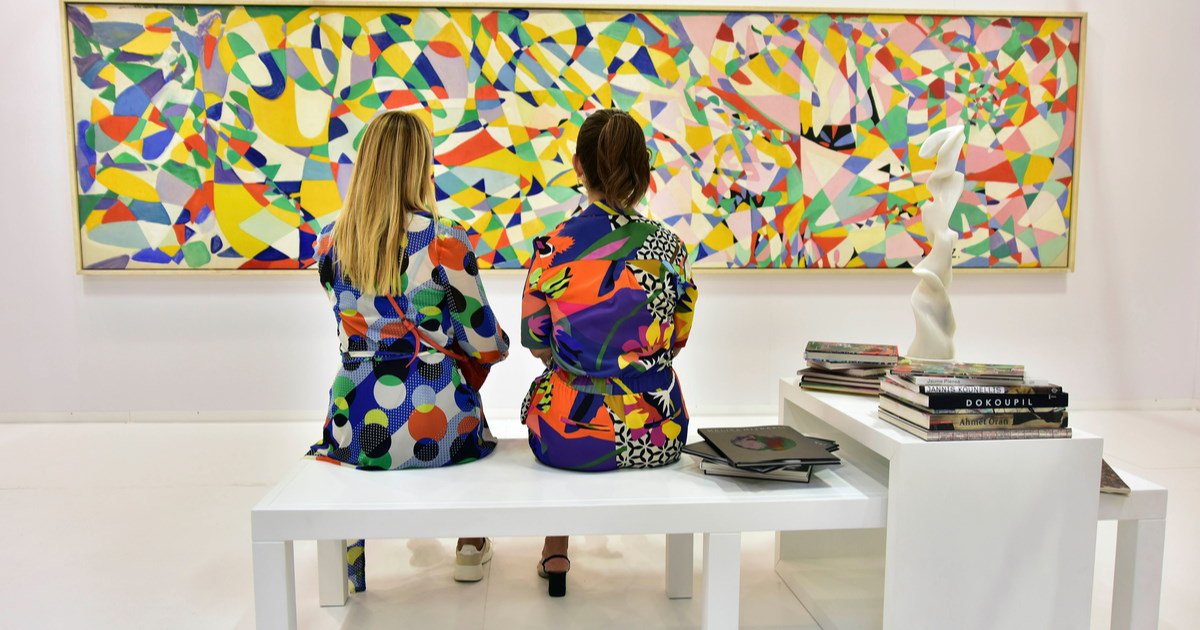 Istanbul Modern opened in 2004 as the first museum of modern and contemporary art in Turkey.

With the aim of uniting the artistic creativity and cultural identity of Turkey with the international art world, the museum offers a wide range of activities.

Istanbul Modern's global vision is to collect, preserve, document and exhibit works of modern and contemporary art and make them accessible to the general public. The museum offers a variety of cultural activities in its permanent and temporary exhibition halls, in the photo gallery, in the rooms for educational and social programs, in the library and in the cinema. Galata Tower, one of the most iconic symbols of the city, was actually built in 528 by the order of the Byzantine Emperor Anastasius.

When the Genoese, a kingdom in Italy, settled in this region, they enlarged the tower and used it to watch the ships approaching from afar. After the city was conquered by the Ottomans, it first served as a dungeon and then as a fire tower.

It is possible to go up to the terrace of this historical building and look at a magnificent view. This is one of the favorite spots of Istanbul visitors to take pictures and get an overall view of the city from every side. Don't miss the Galata Tower!

Plan your trip to Istanbul with experts

Let us help you design your trip to Istanbul according to your unique situation and desires. With our experience of 25 years and our network, we will get you the best prices for hotels and activities.

The Istanbul Museum Pass allows you to visit 10 museums of Istanbul. The card is valid for 5 days and gives you free skip-the-line entry to selected museums.

Get Istanbul Museum Pass with 3% discount

Opening hours: The opening hours of the museums in Istanbul vary according to the summer and winter seasons. On the first day of certain public holidays, the state museums open at 13:00.  On the other days, regular opening hours apply.

Are museums free in Istanbul?

Not all the museums are free of charge in Turkey and in Istanbul. You can find the information about the prices and entrance for the top visited museums in this article.

What day museums are closed in Istanbul?

How much is the entrance to Hagia Sophia?

There is no entrance fee for Hagia Sophia. But, we suggest you to do your visit with an official tour guide to this unique monument with many striking details and 1500 year old history.

Is the Blue Mosque free?

Yes, it is possible to visit all Imperial Mosques in Turkey free of charge including Blue Mosque except for the praying times. You can check the prayer times here.

Which are the most important museums of Istanbul?

In Istanbul, one can get to know better and feel the nostalgia of the Ottoman lifestyle by visiting the Imperial Palaces that serves as museums today including Topkapi Palace Museum, Dolmabahce Palace Museum and Beylerbeyi Palace Museum. Istanbul Archaeology Museum is also highly significant with a large collection about Istanbul's history as well as various sections about Eastern civilisations including Babylonian, Egyptian and Sumerian.

How much is the Museum Pass in Istanbul?

You can get Museum Pass from our shop for € 37.00 with a special discount.

Which is the best museum of Istanbul?

Istanbul as a cosmopolitan city with a substantial history has world-famous museums. Even if the term "best" could be an individual attribute, we can count the Topkapi Palace Museum with Harem, Dolmabahce Palace Museum, Istanbul Archaeology Museums among the top rated museums.

Location of the Museums

(Link to the map)

All Museums in Istanbul

Museums with a connection to Istanbul’s history

Dolmabahçe Palace – The New Town of the Ottoman Empire

The Istanbul Archaeology Museums, located just below Topkapi Palace, is a END_OF_DOCUMENT_TOKEN_TO_BE_REPLACED

The Yerebatan Cistern, also known as the "Sunken Palace" due to END_OF_DOCUMENT_TOKEN_TO_BE_REPLACED

Hagia Irene - the "Church of Holy Peace" - is a END_OF_DOCUMENT_TOKEN_TO_BE_REPLACED

Way of life, culture and belief in Turkey

Built on the foundations of the Great Palace of Constantinople, this END_OF_DOCUMENT_TOKEN_TO_BE_REPLACED

Turkish and Islamic Arts Museum: Ticket, Hours, Things to do…

Istanbul's oldest dervish monastery, the Galata Mevlevihanesi, which dates back to END_OF_DOCUMENT_TOKEN_TO_BE_REPLACED

The Museum of Turkish Jews, founded on the occasion of the END_OF_DOCUMENT_TOKEN_TO_BE_REPLACED

Some time ago, with the idea of opening a museum in END_OF_DOCUMENT_TOKEN_TO_BE_REPLACED

From contemporary Turkish art to exhibitions from the past.

Located in the Beyoglu district, Pera Museum is housed in a END_OF_DOCUMENT_TOKEN_TO_BE_REPLACED

You cannot admire art in a more beautiful way. The Sakıp END_OF_DOCUMENT_TOKEN_TO_BE_REPLACED

Enjoying a unique location, the museum opened in 2004 and stands END_OF_DOCUMENT_TOKEN_TO_BE_REPLACED

Burhan Cahit Doğançay was an important artist of our time. His END_OF_DOCUMENT_TOKEN_TO_BE_REPLACED

Since its founding in 2001, the Elgiz Museum of Contemporary Art, END_OF_DOCUMENT_TOKEN_TO_BE_REPLACED

Turkish history of technology, seafaring and past

Istanbul Museum of the History of Science and Technology in Islam

Opened in 1994, the Rahmi Koç Museum is located on the END_OF_DOCUMENT_TOKEN_TO_BE_REPLACED

Your safety is our priority.Read our travel advice on Coronavirus (COVID-19)   and book your PCR Test online here.