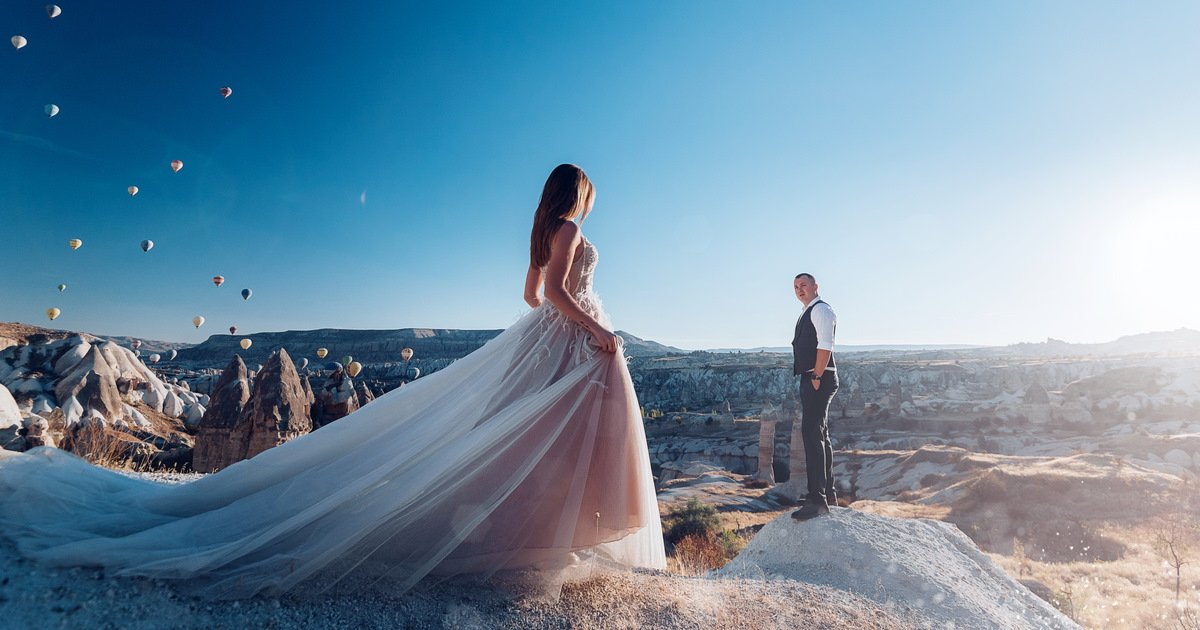 As in any country, there are many traditions around weddings in Turkey. Turkish people have a deep attachment to customs and carry them through generations and even countries... The Turkish diaspora is also very attached to these traditions in Germany, France, and the UK.

Depending on which area of Turkey you looking at, there are different customs and ways of doing things during a wedding. Especially in the countryside, the traditions carry a lot of importance.

A wedding in Turkey is more of a family affair than a personal one. Accordingly, the whole family is involved and has a role in the planning and execution of a Turkish wedding. This has an impact on the traditions as you will read below.

We have compiled here a small selection of customs and traditions in Turkey. You will notice that some of them have similarities to some European cultures, like some of the German customs.

Also Read: The ultimate guide to weddings in Turkey

1. Asking for the Bride's Hand or El İsteme

As in Germany and many other counties, it's customary to ask the bride's father for his daughter's hand in marriage. "Kız isteme," as this is called in Turkish, follows a precisely defined ceremony. The groom travels with his parents, as well as older family members, with flowers and chocolates (sometimes presents, too) on a fixed day to the bride's parents home.

After the families have talked a bit about the weather and football, the eldest male member of the groom's family will ask the prospective brides's father for his daughter's hand, always saying the same words, "Allah'ın emri Peygamber'in kavli ile kızınızı, oğlumuza istiyoruz", which means "With the command of Allah and the word of the Prophet, we want your daughter for our son."

The bride's family can ask for time to think it over, and then the ceremony can be repeated on another day. When the bride's father finally agrees, rings are exchanged and the wedding vows will be made.

The promise ceremony is called a "söz kesmek" in Turkey. The Turkish word söz means promise. Mostly nowadays, it's performed on the same day that the bride's hand is asked for. Simple rings, not the engagement rings, are tied together with a red ribbon. On a silver tray, the rings are held out to the engaged couple, who put them on each other. The red ribbon is cut and the ceremony is complete.

This one is a funny one! Grooms don't really like it because future brides, in the heat of the action, tend to abuse it sometimes. During the "el isteme", mentioned earlier, when the families are small talking before the bride's hand is asked, the bride makes Turkish coffee to offer to the guests.

The groom's coffee is flavored with salt instead of sugar. Some might even put paper in it. If the groom drinks it without batting an eye, it's considered a positive sign, but if the taste is unbearable, the groom may cough a lot and it can ruin the moment or create a big laugh! The "nişan bohcasi" is intended for families to show their appreciation for each other. It usually contains practical gifts and everyday items that can be used after the wedding, such as perfume, slippers, pajamas, clothes, shoes, makeup, towels, shaving utensils, and similar items. In the past, all these gifts were wrapped in an elaborately decorated large scarf and given to the partner's family.

Nowadays, you can buy baskets or even small chests especially for this purpose. It varies from region to region when the "nişan bohcası" is handed over, but usually it takes place before the engagement.

Traditionally, the engagement party is paid for by the bride's family. The engagement can be celebrated in with small circle of friends and family in the bride's house, or a hall or a restaurant can be rented and the festivities can take place there. There is no limit to the number of participants. In provincial areas, 500 or more guests are not uncommon. A tradition that is still very popular is the "kına gecesi". This celebration can be held at the bride's home, an outside location, or restaurant. The bride, as well as the guests, are festively dressed. The bride sits on a chair wearing a long red veil that completely covers her head and face.

At first, sad songs are played and the bride cries, this is, after all, the farewell to her parents' home. After a certain ceremony and accompanied by the appropriate music, the future mother-in-law puts a gold coin in the bride's hand and opens the ceremony for the henna painting.

After that, the bride's tears dry up, the music becomes more cheerful. Then, the bride and guests enjoy being together and dance.

8. Who Pays for the Wedding?

The wedding festivities are paid for by the groom's family. Usually the family rents a salon or a venue. Weddings in large hotels or on a ship are also becoming more and more popular. The choice of location depends on the budget, as well as the number of invited guests.

9. Who Buys the Wedding Dress?

The wedding dress is bought by the groom's family, while the bride buys the suit that the groom will wear at the wedding. Check out this article on Turkish wedding dresses.

On the day of the wedding, both the bride and groom, go to the hairdresser, both accompanied by friends and family members. The bride also gets her makeup and nails done. Sometimes the groom picks the bride up directly from the hairdresser with the wedding car and they drive from there to the registry office.

Usually, however, the bride returns to her parents' house for the last time, where she puts on her wedding dress. From there, the groom then picks her up, with a special procession and even a drum performer. See the next tradition below.

Often musicians, called "Davul Zurna", are hired to play loudly in the street during the bridal pickup. Davul is a big drum and Zurna is a wind instrument with a funnel-shaped bell. This is to shorten the time the groom has to wait for the lady of his heart.

According to tradition, the bride's father ties a red ribbon around her waist. This is supposed to bring luck and wealth and at the same time stands for the purity of the bride. Often there is dancing in the street before the bride and groom get in the wedding car.

Every bride should traditionally wear something old, something new, something borrowed, and something blue. The old should symbolize the bride's attachment to traditions and to her family home, the new represents the hope with which she looks to the future, the borrowed symbolizes her credibility in that people would lend her something, and the blue represents purity and fidelity. The couple travels to the wedding in a car decorated with flowers. Often the wedding convoy drives through the streets honking loudly. All the cars that belong to the convoy have white ribbons tied to their wing mirrors to bring good luck to the couple. The loud honking is said to keep away the evil spirits. Sometimes the path of the wedding car is blocked and a toll must be paid. Before the wedding ceremony, the bride writes the names of her single friends on the bottom of the shoe. Whoever's name is the first to be unreadable or the most rubbed off at the end of the day will be the next to get married.

There are several things that you may recognize that happen at Turkish weddings.

After that, the couple leave in their car and their new life can begin!

If you are planning your wedding in Turkey and need a local partner to organize it, we are here! IstanbulTouristInformation is specialized in high class organization service all over Turkey. Get a free quote and information using our contact form.

Ask us a Question about Turkish Wedding Traditions

Ask us your specific questions about wedding traditions in Turkey a professional of weddings will answer you in less than 24H.

Getting Married in Turkey: Paperwork and Legal Procedures for Foreigners

14 Creative and Unique Ideas for an Amazing Wedding in Turkey

Buying a Wedding Dress in Turkey

How to Pick a Wedding Photographer in Turkey

Register now & get your add on this page!

You are in the wedding industry and you want more visibility? Register now, get your personalised add on this page and reach thousands of couples who want to get married in Turkey. Register & Get your offer: