The Whirling Dervish Show is undoubtedly one of the most popular experiences in Turkey, which should not be missed during a trip to Istanbul.

We answer these and many more questions in this guide to Whirling Dervishes. You will also read explanations to the different concepts of Whirling Dervish Shows, the history of Sufism as well as helpful information about tickets and tours. What is a Dervish?

A Dervish is a Sufi, a member of the Mevlevi order. Dervishes or Sufis are the followers of 13th century mystic and poet Jalaladdin Rumi, also known as Mevlana. In order to perform the Whirling Dervish ceremony, Dervishes must complete a strict spiritual and physical training that takes them on a spiritual journey.

Sufism is an 800 centuries-old mystical movement formed within Islam. It seeks the discovery of truth and union with God through devotion and love.

Most famous are the teachings of the philosopher and Islamic scholar Rumi. His philosophy is essentially about peace, acceptance and the search for divine truth and love directly with God.

The community of Sufism developed religious practices focusing on self control that enable both mental and mystical enlightenment as well as a loss of self, with the ultimate goal of mystical union with God. 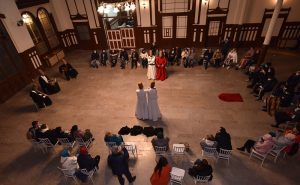 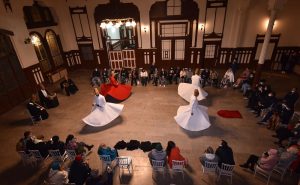 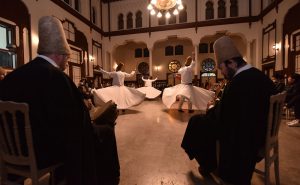 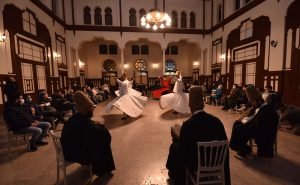 But the Mevlevi Sema ceremony is more than a visual spectacle; it is a cultural asset full of rituals, religious elements and characteristic. It is no surprise that the Sema ceremony has been declared an Intangible Cultural Heritage of Humanity by UNESCO.

What is a Whirling Dervish ceremony?

The Whirling Dervish Ceremony, also known as Sema, is a transcendental performance that symbolizes the path to accessing God.

The Sufi dancers, called Semazen in Turkish, wear conical hats and white robes and skirts, which symbolizes the white clothing Muslims wear when they die. The ceremony is very rich in such mystical symbolism, which involves not only the clothes, but also the movements of the semazen.

The ritual starts and ends with passages from the Koran. Sufi dancers whirl in rhythmic patterns, following certain rules that have been practiced for hundreds of years. This ritual dance is accompanied by traditional Mevlevi music, called ayin.

Through their traditional practice, the dervish strives to enter a trance in order to become one with god. The ceremony thus represents a journey of man’s spiritual ascent to “perfection” through mind and love.

Where to attend a Whirling Dervish Ceremony in Istanbul?

It is possible to see dervishes perform at a variety of venues in Istanbul, such as bars, restaurants and Bosphorus dinner cruises. If you want to see a Whirling Dervish Show, there are basically two major shows in Istanbul that we recommend. Both shows are worth seeing, but have different concepts.

Important: During the Whirling Dervish dance, guests are kindly asked not to applaud, talk, take pictures or use their smartphones. This venue is in Şirkeci Train Station*, close to Topkapi Palace. The Whirling Dervish Show takes place in a subterranean space inside the hall that once was once known as the final stop of the Orient Express. The performance is opened by a live musical introduction of the Mevlevi music and followed by a captivating Sema dance.

The historic setting, the great acoustics of the famous train station and the special blue lighting that creates a mystical atmosphere make the venue a great place to experience the spiritual ceremony of the Whirling Dervishes. Since this show is very popular, we advice to book in advance.

*Because the Sirkeci Train Station venue is in renovation, the whirling show location is in Hamamizade İsmail Dede Efendi Evi for the time being.

Get Your Tickets Now Hodjapasha is a cultural center that is housed in a 15 century Hamam close to Hagia Sophia. This venue offers a slightly more touristy experience of the Whirling Dervish Show. The show lasts about an hour and begins with a brief introduction video about the Mevlevi order. This is followed by a 10-minute concert of Sufi music and the Sema dance, accompanied by live music, Persian chanting, and special effects.

Besides the Whirling Dervish Ceremony, there is a small exhibition that presents a variety of personal items, instruments and Dervish clothes. Please note that children under 7 years are not allowed.

Please keep in mind that these shows aren’t real, they are performances. If you want a real experience, please check the audio tours below.

More and more visitors interested in the Whirling Dervish Ceremony want to have a less touristy but more spiritual experience.

If you want to discover the real Mevlevi culture or are interested in Sufism, we recommend you the following audio guide apps that offer an authentic cultural experience: This self guided audio tour from YourMobileGuide will lead you to the original places of Sufi, while providing you with fascinating background information about Sufism, mysticism, and more. Follow the traces left by the dervishes in Istanbul and head to Dervish lodges, tombs, mosques and other important places in Istanbul’s Beyoğlu, Üsküdar and Beşiktaş neighborhoods that play a role in Sufism. History of Sufism in Turkey

Although Sufism has existed since early Islamic history, it did not spread in the Turkic-speaking world until the philosopher and Islamic scholar Jalaladdin Muhammed Rumi came to Konya in the 13th century. Even though he was not a figure for mainstream Islamic sects, his philosophy echoed all around the regions of Anatolia hosting co-existing religions and streaming immigrants.

After his death in 1273, Rumi’s followers founded the Mevlevi Order. The spiritual movement spread rapidly throughout the Ottoman Empire.

In 1925, after the fall of the Ottman Empire, Turkey’s first president Mustafa Kemal Atatürk closed all Dervish orders and Mevlevi Houses, as part of his secularization reforms. Until then, the mevlevi houses (mevlevihane) were the Derish lodges where Sufi members learned Rumi's philosophy and the ethics and rules of conduct of the Mevlevi order through dance, prayer, and poetry.

It wasn’t until the 1950s that the Turkish government started to permit Dervishes to perform in public again. Finally, further restrictions were lifted in the 1990s.

Since the early 2000s, some Sufi communities have begun permitting female dervishes.

In 2008, the Sema ceremony was declared "Masterpieces of the Oral and Cultural Heritage of Humanity" by UNESCO.

Today, two of the most important Mevlevi Houses that can still be visited are the Mevlevi Museum in Konya and the Galata Dervish Lodge (Galata Mevlevihanesi) in Istanbul. The Mevlana Museum is also the place where Rumi is laid to rest. What is a Whirling Dervish and why is it called that?

A Dervish is a Sufi, a member of the Mevlevi order. Dervishes or Sufis are the followers of 13th century mystic and poet Jalaladdin Rumi, also known as Mevlana. They are called Whirling Dervishes because of their Whirling Dervish dance ritual known as Sema, in which they spin in rhythmic patterns to fall into a trance and become one with God.

Why don’t Whirling Dervishes get dizzy?

Although whirling dervishes spin in a rate of 33 to 40 rotations per minute, they manage to keep their balance without getting dizzy. One way they do this is by gradually increasing the number of rotations. This tricks the brain into reacting less sensitively to the impulses it receives. Very important is also the body position, such as the titled position of the heads of Sufi dancers. This position allows them to balance the fluids in the ear canals and thus minimize the feeling of imbalance.

Can a woman become a Whirling Dervish?

For a long time, only men were allowed to dance as Whirling Dervishes. Since the early 2000s, some Sufi communities have started permitting female dervishes.

Complete Guide of Shopping in Istanbul

Your safety is our priority.Read our travel advice on Coronavirus (COVID-19)   and book your PCR Test online here.